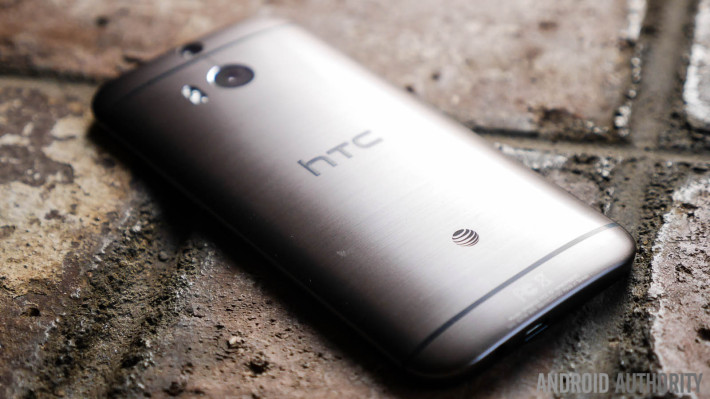 Update January 28: We’ve added the most recent details on the M9, including a credible render shared by @evleaks.

As we’re heading towards the Mobile World Congress in early March, more and more reports and rumors about the HTC One (M9) emerge. It’s likely that the M9 will battle Samsung’s latest Galaxy S release for the MWC spotlight, and we can’t wait to see what the two phone makers have in store for us.

Following a few months of vague and unreliable reports on HTC One (M9) (aka HTC Hima), we’re now beginning to see a slew of credible reports that give us a good idea of what to expect. We’ve already learned that HTC will introduce a wearable along the M9 on March 1, but the latest gossip points to a larger device codenamed Hima Ultra coming at the same time.

As we learn more about these devices, we’ll update our HTC One M9/Hima rumor roundup with the latest info. Let’s kick it!

Hima (M9) should feature similar design language to its predecessors

Given how the One has evolved from the M7 and M8, we imagine the next-gen flagship will retain a similar look and feel when compared to its predecessors, though we expect there will be at least some minor refinements to HTC design’s language.

There have been whispers that HTC will further improve the build quality by switching to a tougher aluminum alloy when compared to the M7 and M8, but really there’s few concrete details about how it will differ. The device is also said to be launching in Gray, Silver, Gold or Gunmetal Gold color choices.

One set of images that recently leaked appear to show a device with very thin lateral screen bezels, but the same large bezel at the bottom, with the HTC logo. It’s possible that the images actually show a prototype or even a Hima hidden in a M8 chassis in order to conceal it. One interesting feature is the large camera module on the back, but it remains to be seen whether this will make it to the final design or not.

According to a HTC Source report, the images above actually show a decoy planted by HTC to send us down the wrong path. Furthermore, trusted leaker @evleaks returned from his retirement to reveal what he claims is a render of both the One (M9) Hima and the Hima Ultra, a possible successor to the One Max that features a fingerprint sensor on its front.

Both device feature top to bottom glass fronts, instead of the panels hosting the grilles of the BoomSound speakers. The speakers themselves are still present, but they are partially covered by the front glass, save for narrow slits at the top and bottom. The HTC logo, which used to be placed on the large bezel at the bottom of the display has been moved down, and the bezel itself is gone. Overall, this design means the One M9 will be more compact than its predecessor, at the expense of sound loudness.

Bloomberg recently reported that the One M9/Hima will look a lot like the M8 in terms of design and size, keeping the same distinctive and sleek look of the One series.

At least when it comes to size and res, the One M9 should provide a similar experience to the M8

Some of the early rumors associated with the HTC One M9 claimed the phone would have a larger 5.5-inch display, but the most recent rumors have instead pointed towards a more modest 5-inch 1080p display. While not as impressive as the QHD resolutions adopted by some of 2014’s flagship products, the One M9 (Hima) appears to have a much smaller display than most of the phones that have went with QHD, and so the difference in resolution shouldn’t be that noticeable.

The One M9 Max/Hima Ultra appears to feature a 5.5-inch display, though that’s just an estimation based on the render above.

Again early HTC One M9 rumors suggested the device wouldn’t rock the boat when it came to specs, as it was believed to carry a relatively modest Snapdragon 805 chipset. More recently, more than one rumor has suggested that this isn’t really the case and that the One M9 will actually pack a Snapdragon 810 with 3GB RAM. Considering the fact that the LG G Flex 2 is launching with this chipset, we can’t say we’d be too surprised. Battery life is also expected to make a minor jump upwards, going from the 2600 mAh battery in the M8 to a 2840 mAh battery. As always, except the battery to be non-removable.

The Bloomberg report we mentioned above also says the HTC One M9/Hima will feature a Snapdragon 810 processor, and a report published on Forbes points to the same direction.

As for other sensors? It’s hard to say what HTC will or won’t bring to the table. With more flagships bringing stuff like heart rate monitors and fingerprint scanners to the mix, it’s possible HTC will follow suit. The M7 and M8 didn’t pack these extras, but it is worth mentioning that the HTC One Max did in fact offer a fingerprint reader upon its debut. It looks like the Hima Ultra will keep the fingerprint sensor, though many users could find its shape and placement questionable.

HTC has come under a lot of flack for its Ultrapixel camera, but this time around HTC is finally switching things up a bit. Reportedly, the phone will offer a 20.7MP rear facing camera, though the exact sensor isn’t known just yet. On the front, reports say there will either be a 13MP shooter or a 4MP UltraPixel camera — with the former being similar to the Desire Eye’s setup and the latter akin to the new Desire 826.

The concept render below shows what we can expect from the One M9. Rumors point towards the M9 Max keeping the Duo Camera found on the M8, but we’ll need more conclusive proof in this area.

On the camera app side, expect to see HTC’s Eye Experience suite of software improvements, that will make all your images, but especially your selfies, much better.

One thing HTC is known for is its sound quality, but that could change a bit with the One M9 because of the aforementioned change in design of the BoomSound speakers. While a drop in loudness is to be expected, the smaller chambers could also mean the sound is less rich than on the M8, unless HTC managed to mitigate the issue.

In the past, Beats has powered the sound tech behind the One series, but according to at least a few early reports, HTC may be teaming up with Bose this time around. The device is said to feature Dolby 5.1 surround technology integration.

Not a lot of rumors have focused on what exactly might be different with the HTC One M9 (Hima) software, though you can expect it to run Android 5.0 Lollipop with HTC Sense 7 on top. One report mentioned advanced “location services” without providing other details. Given that HTC is expected to release a smartwatch along the M9/Hima, it’s likely that there will be at least some basic customization to take advantage of the wearable device. No other news on special software features or improvements just yet, though we’ll be sure to keep you updated as soon as we learn more.

This week, HTC sent out invites for a press event taking place in Barcelona on March 1, the day before the official opening of MWC. While the M9/Hima wasn’t mentioned or hinted at, we’re positive we will get to see it then, alongside a wearable companion. As for the actual availability date, if all goes well, HTC should make the new flagship available with a few weeks from its official introduction.

RETURN OF THE MAX SERIES?

The original One Max

A bit earlier in this post we said that rumors originally claimed the One M9 would offer a 5.5-inch display, only for later reports to suggest the actual size will just be 5-inches. As it turns out, the 5.5-inch claim may have some merit, though it applies to the upcoming “Max”-sized model and not the standard M9.

The One Max series has pretty much be a one-off release for HTC. Tons of reports surfaced about an alleged One M8 Max (aka One Prime) last year, though nothing ever became of these rumors. Now the latest claim is that the One M9 Max, aka the HTC Hima Ultra, will debut with a bigger 5.5-inch QHD display that is “bezel free” in design, allowing for the phone’s footprint to be as small as possible.

Allegedly the phone will have the same Snapdragon 810 processor and 3GB RAM as its littler brother, the One M9. In fact, the only major difference in specs will be the display size.

Just like the Galaxy S6, all we have is a semi-fuzzy image of what to expect from HTC’s One M9 at this point. That said, most of the Hima/One M9 rumors are consistent in regards to the fact that the phone won’t see huge changes in design language and, like the M8, will simply further refine the HTC One formula, instead of trying to reinvent it.

What do you hope to see from the HTC One M9 (aka Hima)? Let us know in the comments. Also be sure to participate in our poll!