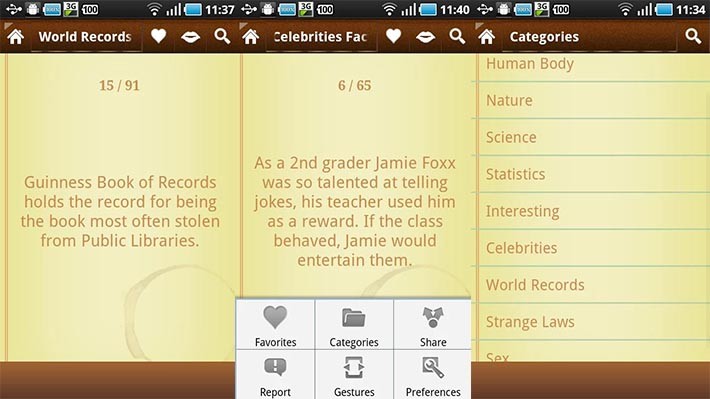 They say that laughter is good for the body and soul and we agree with that notion. In most cases, you’ll find your laughs online through a range of websites but there are some good Android apps that can get the job done too. Here are the best funny apps for Android.

[Price: Free with in app purchases]
First up is 9GAG and it boasts a large collection of memes, funny images, gifs, videos, and a lot more. There are non-funny things like cosplay and cute stuff as well so you can get your quota of furry kittens and Comicon stars. The app is free to use and claims to give the complete 9GAG experience on Android, including message boards, sharing, and the ability to participate in voting. 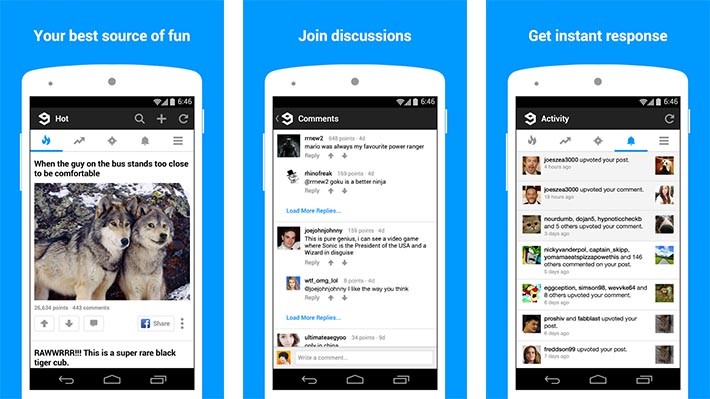 [Price: Free]
Cheezburger is one of the more popular humor sites on the internet that boasts more than 10 million visitors per month and the app is pretty popular as well. The app lets you browse gifs, videos, images, jokes, comics, and tons of other hilarious content. You can also create posts using the app, sign in using Facebook or email, and you can access other sites like Memebase, ROFLRazzi, and more. 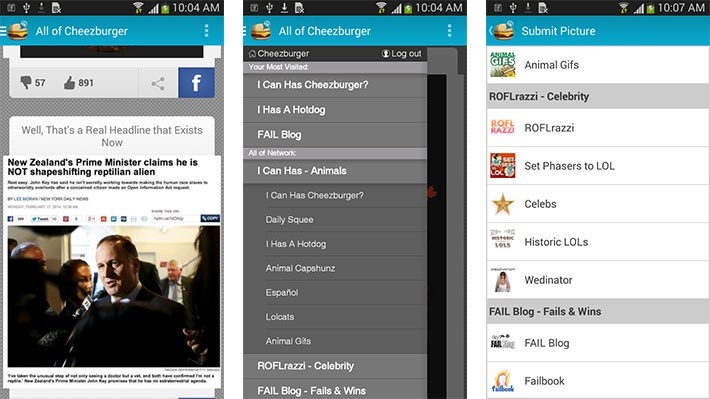 [Price: Free]
theCHIVE is a humor site that posts pictures, stories, videos, and more. The Android app is fairly solid and contains a lot of humorous things. A recent update now allows people to submit more funny stuff to be used by the site as well as a navigation menu to quickly get to categories, top rated, favorites, and other parts of the site. The interface is clean and minimal which makes finding funny stuff even easier. It’s a solid app with some funny stuff in it. 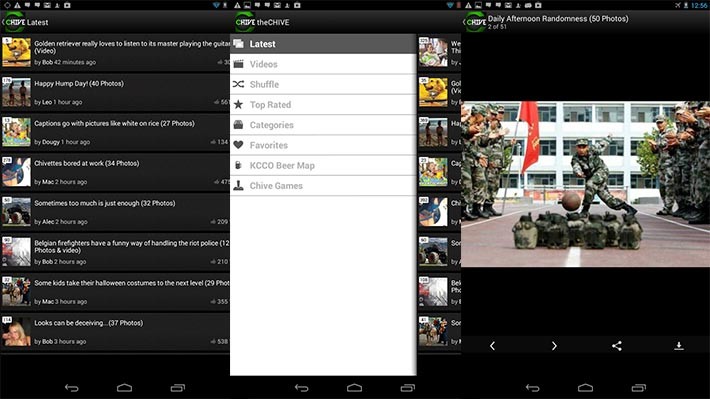 [Price: Free with in app purchases]
Food Battle is every tap-and-play, cutesy game on Android rolled up into one giant parody. In this game, you must kill homicidal donuts that have taken your friends and family hostage. It features cameos from Smosh and dialogue that is geared toward a more mature audience which is a pleasant change from all the for-kids games like Angry Birds or Candy Crush. It features simple controls, puzzles, and characters voiced by Smosh. 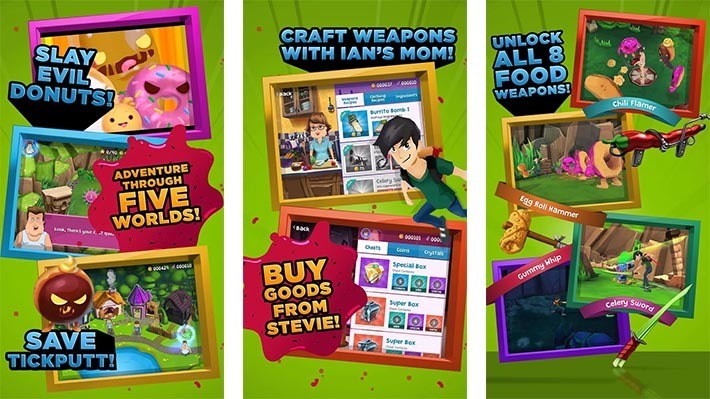 [Price: Free]
Funny Facts Free is essentially what the name says it is. It’s a bunch of funny, weird, goofy, or otherwise entertaining facts and the app is, in fact, free. It doesn’t have the shock value or immediacy of apps like Cheezburger or 9GAG but it does have some entertaining facts. The interface is simple and the app is totally free with no in app purchases. The app will also read you the facts if you want it to. It hasn’t been updated in a while and we imagine that one day this will leave the list due to developer disinterest, but for now it seems to work well.

[Price: Free]
Despite the obvious lack of creativity when it comes to names, Funny Jokes is an app that contains within it a bunch of funny jokes. You can choose by category and some categories include Chuck Norris facts, one liners, yo mamma jokes, and others. The interface is very simple which is exactly what an app like this should have and it’s free to use. Users can also comment on jokes and rate them. It was also updated somewhat recently. 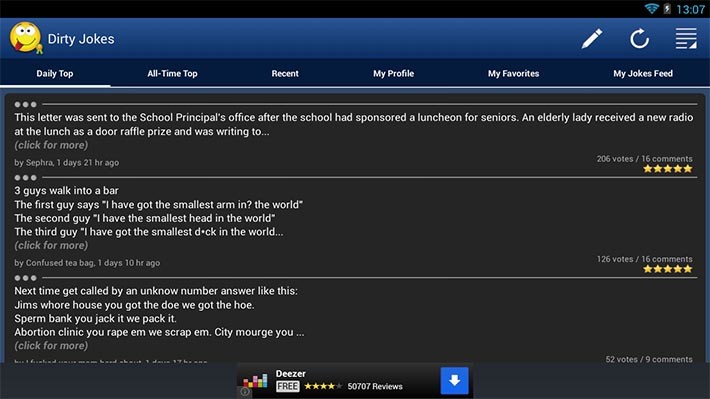 [Price: $4.99]
Goat Simulator is a game where you play the every day life of a goat assuming, of course, that the goat is on many, many drugs. This game started out as a tech demo some years back and the bugs were so hilariously bad that the gaming community clamored for a release. What we get is a game that is intentionally half done because it’s funnier that way. The fun comes with seeing exactly what you can get the goat to do. It’s a tad expensive but it’s still fun.

[Price: Free]
LOL Pics is a lot like 9GAG and Cheezburger in that you get to look through a collection of funny pictures. The user base adds new photos every day in a gigantic range of categories including fails, FMLs, puns, and other random stuff. The app itself does need a little work if you want more rich features like profile management but it handles general browsing well enough. Also, the interface could use an update but otherwise it’s a good app.

[Price: Free]
Opera Browser is not, in and of itself, a funny app. However, most of the big funny websites don’t actually have an Android app which means the only way to access them is via a web browser. Any web browser will do really thanks to bookmarks, but the way Opera handles them is why they’re on this list. When you bookmark an app, it shows up on the app’s front page (called Speed Dial) as a nice, clean icon. That means you can bookmark all of your favorite sites and they show up on the front page of Opera much like a miniature app drawer making them easy to access with a clean presentation.

[Price: Free]
The booth series apps are a range of photo editing apps that make the subject of the picture look a particular way. There is FatBooth, AgingBooth, UglyBooth, and others that will make people look fat, old, ugly, and other things. They are gimmicky apps that have no real functionality but it’s a fun to spend a couple of hours manipulating your friends’ Facebook photos. All of the apps are free and some perform better than others. Some have found a couple of these apps offensive, so if you’re easily offended, we recommend you not try these apps. 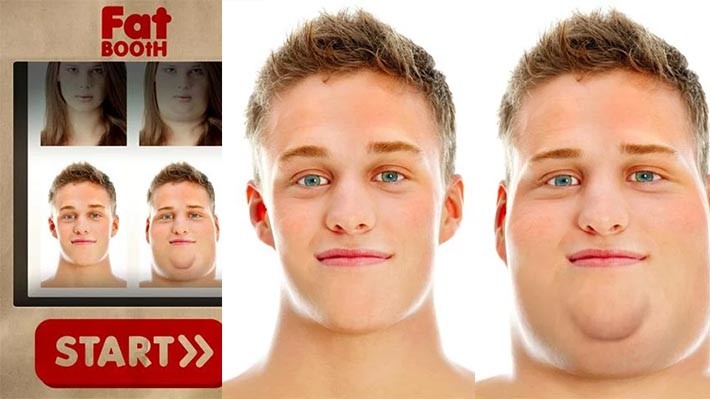 [Price: $4.83]
Last up is another simulation app that is simply hilarious. In surgeon simulator, you play as a doctor who has no intention on saving any of his patients. You can play as an ER surgeon or a dentist as you slowly destroy the lives of the people foolish enough to put their lives under your care. It is a little bit morbid and dark so those with weak stomachs probably shouldn’t give this one a go. Think of it like Operation except the point is to lose the game.

If we missed any great funny apps on Android, and we probably did, let us know about them in the comments!