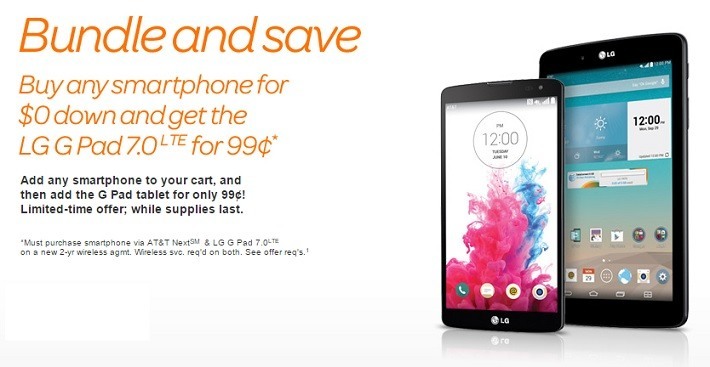 This holiday season LG is teaming up with AT&T to bring would-be customers some pretty sweet freebies. The most impressive of these deals is the ability to get the LG G Pad 7.0 LTE for $.99, which is normally priced at $99.99 on contract. Of course, there’s no such thing as a free lunch and so there’s at least a couple catches involved.

In order to get the tablet, you’ll first need to pick up a brand new LG smartphone from AT&T via an AT&T Next plan. You’ll also need to commit to two years of wireless service for the tablet, which start at $15 a month. In addition to picking up the G Pad, LG is also offering LG AT&T smartphone buyers 50% off on LG Tone bluetooth stereo headsets or 50% off on the LG G Watch. That said, I had trouble figuring out how to get the 50% off to show up on their website, so it’s possible that the 50% offers are only for in-store only.

According to AT&T, all of these deals can be used separately or in conjunction with one another. Before you take advantage of any of these offers, remember that, unlike the G Pad, the latter two offers don’t require you to carry an additional data plan for two years… just saying. What do you think of LG and AT&T’s holiday promo, a good value or not?