2-Line unlimited everything plan announced for T-Mobile for $100 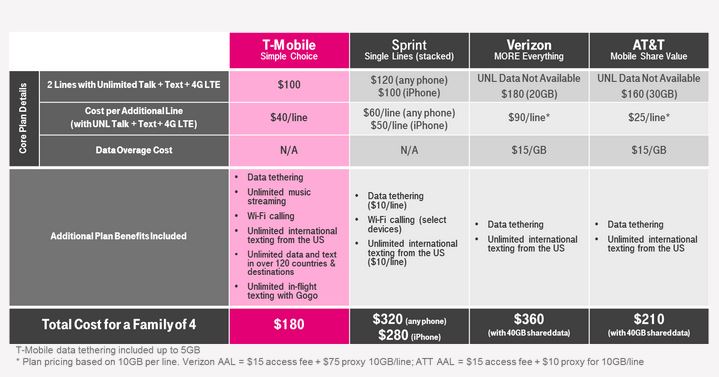 Looks like T-Mobile and CEO John Legere don’t sit still for long when it comes to how they deliver service to their customers. Data limits are one of the biggest pain points across carriers, unless you are grandfathered into something special from back in the day when devices and people weren’t so data hungry. T-Mobile has consistently been putting the screws to the other guys for some time now. The changes don’t have an apparent end in sight and that is a good thing. Today marks another big day for T-Mobile and its customers as an announcement of a new plan has hit the wire. In typical fashion, John had quite a few things to say in the press release and Twitter, in a fantastic #Tweetstorm, about it all too.

Before we get to his antics, here is what the announcement is about. As of tomorrow, December 10th, customers can take advantage of an unlimited talk, text and 4G LTE plan with two lines for $100 a month. That includes data tethering, WI-Fi calling, unlimited international texting from the US, unlimited data and text in over 120 countries and unlimited inflight texting with GoGo. Oh, and it is $40 per line after that to get in on the action. Take a gander.

Personally, the tethering option being included  and not costing extra is fairly huge to me. That has been a battle and pain point for a number of years for a lot of people. Yes, there were ways around it, but it was more so the principle of the thing. Granted, the tethering shows that you get up tp 5GB of data.

Snippets from the press release from John:

“People are saying loud and clear that they hate the confusion and complexity of the carriers’ shared data plans, and they should,” said John Legere, president and CEO of T-Mobile. “These plans are purpose-built to do one thing – take money from your pocket and put it into theirs. They threaten you with punishing overage penalties unless you police your own family’s data usage or up your data bucket and spend more every month.

“Unfortunately for American consumers, this scheme is working as intended,” added Legere. “In 2014, AT&T, Verizon and Sprint pulled in more than $1.5 billion – yes, with a ‘b’ – in overage penalties. And, it’s no surprise that AT&T is the worst offender by far – collecting more than half of overage penalties this year. T-Mobile’s unlimited 4G LTE family plan is a simpler, saner alternative to the carrier’s crazy gigabyte games.”

“Of course, every single T-Mobile Simple Choice postpaid customer immediately qualifies to take advantage of this offer. That’s how the Un-carrier does it, putting our customers first,” said Legere. “But not the carriers. Last week, one of them launched a new promotion that not one of their existing customers could get. That makes my head spin, and it’s exactly the kind of BS we’re on a mission to end.”

On the Twitter side of things, you may just want to go read through his tweets. He labeled them in order so no one would get lost in his #Tweetstorm. Just bounce over to Twitter.com/JohnLegere.

I have yet to see if there is a throttle point after X amount of data used though. I don’t see a special astrix or anything about it either. Even though all previous plans were technically unlimited, you only received full speed to a certain level. Which is still fine in my opinion so long as I didn’t get overage charges. It is interesting that they note “Unlimited music streaming” in the plan benefits, as well as the press release listing “unmeter music streaming”. That would seem that there might be some sort of a cap somehwere. Although, it could just be T-Mobiles way of reassuring people that they are getting the same thing they had, just more of it for less. The bottom of the chart does make mention that the estimates on pricing were based on 10GB of data per line though, that could be the threshold. However, that really should be more than enough data for a large majority of consumers anyways. I will see what shows when it becomes available tomorrow.

The buck doesn’t stop there. If unlimited everything is more than you need and you still want to save some money, they have re-introduced one of their previous plans that frankly killed it. 4 lines with unlimited talk and text and 10GB of 4G LTE data for $100. That would be 10GB to share between lines, but not a set amount dedicated to a line. That is super for families of four who are on a bit of a budget. Of course this all excluded taxes and and device EIP payments. This is all strictly your service plan.

Looks like I will be giving good ole T-Mobile a call tomorrow and switching our two lines up a bit.

The post 2-Line unlimited everything plan announced for T-Mobile for $100 appeared first on AndroidSPIN.