It’s no secret that smartphone manufacturers often use freebies to encourage us to adopt their latest products. More often than not, these include pointless applications and services that we wouldn’t entertain even if the developers themselves paid us to do so, but very occasionally there’s a few hidden gems.

Making its second appearance in the concealed jewel category is Samsung’s “Galaxy Gift Package,” which, for those unaware, is a bunch of apps and services up for grabs for select models in the Galaxy range. The South Korean company first launched the scheme back in March alongside its former flagship smartphone, the Galaxy S5, and to be completely honest, we were pretty impressed with what it had to offer.

Today Samsung announced that it’s re-launching the program to celebrate International availability of the Galaxy Note 4 and Galaxy Note Edge.

This time the gifts are divided into four groups: Productivity, Entertainment, News & Reading and Lifestyle & Others — all four sections offer a fantastic combination of applications, services and deals.

Samsung’s full list of promotional goodies can be seen below: 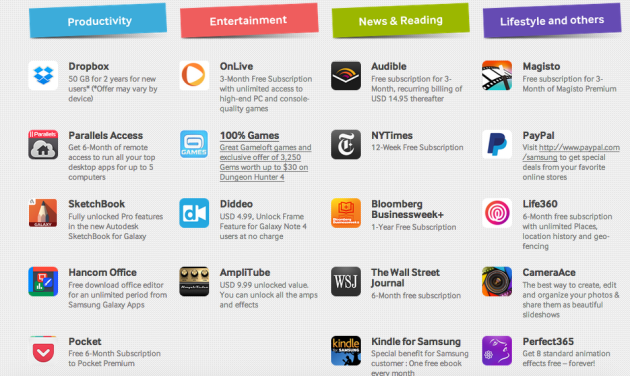 As you can see, there’s a fair degree of value here, so if you’re planning to pick up a Galaxy Note 4 or Galaxy Note Edge later this month, be sure to check them out. To find out more — hit the source link below.