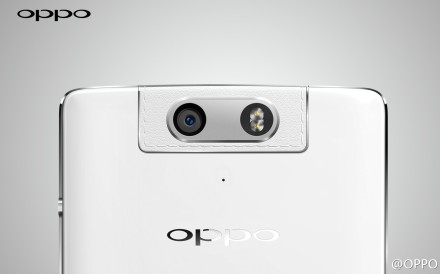 As we roll ever closer to Oppo’s announcement of the N3 flagship, we’re seeing more and more teasers from the company. From specs to an updated cooling system, to a aerospace-grade alloy (and steel), the N3 is shaping up to be an interesting and powerful device. Despite Oppo showing us various camera designs, the whole thing remained a bit of a mystery. Those that remember the N1 know that the camera swiveled, giving people unprecedented selfie power long before selfie phones became a thing. Well Oppo has finally taken a bit of the mystery away after it leaked the above image on Weibo.

We’ll have to wait and see what the front of the handset looks like, but as we can from the back, the rear camera is engrained in a patch of faux leather, much like the entire back of the Note 3/4. From what we can tell in the picture, the camera may be able to swivel like that of the N1. It also appears that the N3 will have a dual-flash setup like the N1′s rotating 13MP Sony Exmor RS camera sensor.

We’re a little over two weeks away from the announcement in Singapore. Is this your next Android device?

Come comment on this article: Oppo N3′s camera shown off in teaser