Home Reviews Samsung Gear S preview: What's it like to type emails on a...
Reviews

Samsung Gear S preview: What’s it like to type emails on a 2-inch screen? 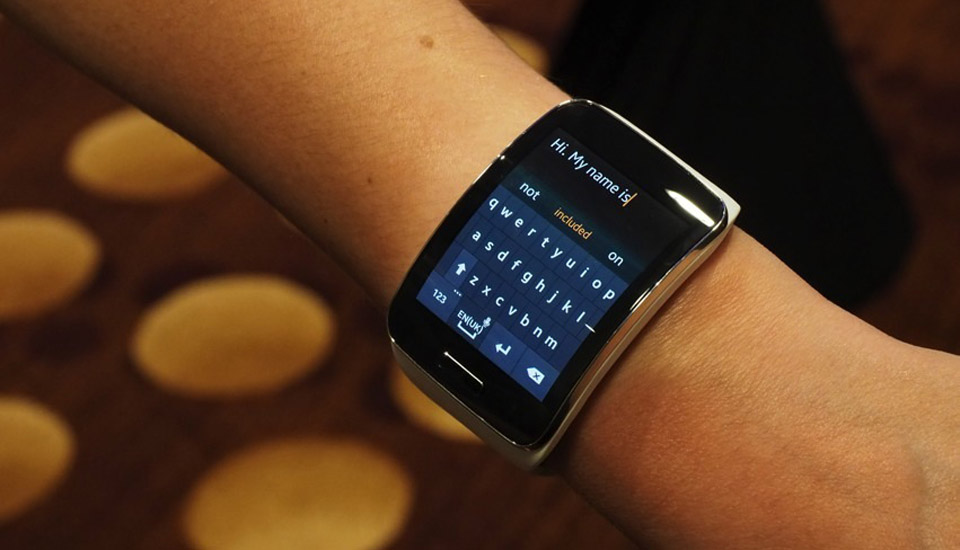 Six. That’s how many smartwatches Samsung has unveiled in the past 12 months. If these devices were Friends episodes, there’d be the original Galaxy Gear (“The one announced last year at this time”), the Gear 2 (“The one with fewer bugs”), the Gear Fit (“The one designed for fitness tracking”), the Gear 2 Neo (“The one that didn’t cost as much”) and the Gear Live (“The one that ran Android apps”). If nothing else, it shows that Samsung is willing to experiment — and maybe even listen to feedback from users, and reviewers like us. Now, as the original Gear turns one, Samsung is showing off its sixth watch, the Gear S: the one that can run without a smartphone. Thanks to its very own nano-SIM card, the Gear S can make calls, as well as show you emails in full, with the option to reply directly from the device using a tiny on-screen keyboard. To Samsung’s credit, it’s unlike any other device it’s made before. But the age-old question still remains: Was anybody asking for this?

In addition to being the first of the company’s watches that you can use without a smartphone, this is also Samsung’s biggest wearable to date. With a curved screen that measures two inches diagonally, it absolutely dwarfs my (admittedly dainty) wrists, as you can see in the above hands-on photos. Even so, some of my bigger-boned male colleagues also tried on the watch, and they too found it rather bulky. Not that style was a top priority here. The key selling points — making calls and responding to emails — require extra space, and frankly, even two inches is pushing it. The kind of 1.63-inch display used on the Gear 2 and Gear Live (a big, honking watch face in its own right) wouldn’t have cut it here.

Other than the fact that it’s not very conspicuous, the design isn’t what I’d call fancy. Certainly, it’s no Pebble Steel, nor even a Moto 360. True, it’s marked by metal accents around the clasp and edges, but my guess is that you’re more likely to notice the removable plastic band, available in white and black. It’s comfortable on the wrists, no doubt thanks to the curved screen shape, but ultimately, it feels more functional than it does stylish. When you’re ready to swap bands, for instance, you basically just pop out the watch face like a piece of Fruit Roll-Up. The design feels functional, but also like an afterthought.

Although Samsung recently came out with its first Android Wear watch, the Gear S runs Tizen OS, just like the Galaxy Gear, Gear 2 and Gear 2 Neo. That means getting around is much the same as it is on those older devices. If you want to navigate backward out of a page, for instance, you swipe down from the top. Likewise, you can swipe up from the bottom of the Super AMOLED display to see a full menu of apps, including the settings menu. Otherwise, the watch only allows up to five home screen widgets. In addition to notifications, the defaults include things like calendar appointments and news headlines, but you can, of course, customize all that to your liking. Ditto for watch faces: There are around a dozen preloaded watch faces, with a mix of new ones, as well as some that were included on older models. 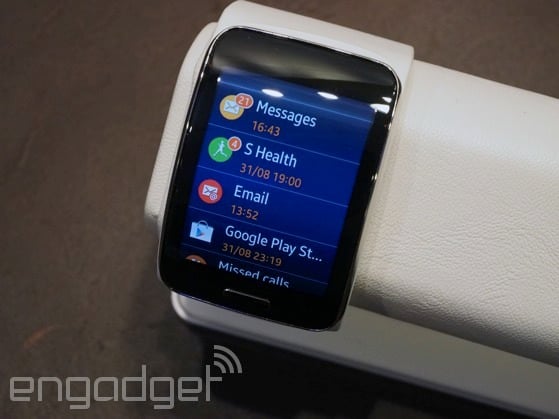 Because things like emails and calls are a big part of the story here, they’re always within easy reach: Just swipe to the left of the main home screen to see a list of your messages, emails and fitness stats from Samsung’s S Health app. Once you’re in the emails page, you can read the full text of a message, as well as see the rest of the conversation listed below it. From there, you can reply using an on-screen keyboard. As it happens, the keyboard allows for both traditional pecking, as well as Swype for dragging lines between letters.

I had the chance to test the feature on multiple test units in various stages of development, none of them final. In some cases, I had an easy time both typing and swiping out letters, with very few typos to speak of. With certain cruder devices, I had trouble getting it to register an “H” instead of a “J.” Either way, the word prediction is hit-or-miss: Sometimes it was spot-on; other times it served up the most unhelpful word possible (“My name is…’included'”?) Obviously, then, the precision here is something we’ll have to revisit in our full review. Until then, I’m quite sure it would have been easier for me to just pull out my phone and type out “My name is Dana” with two thumbs.

Another thing we’ll have to save for our eventual review: the whole phone call thing. Samsung wasn’t demonstrating this feature when we saw the watch in its non-final state. Sorry, folks. 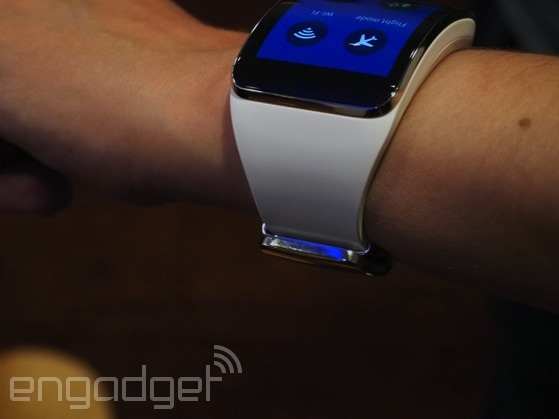 Elsewhere on the device, there’s a heart rate sensor built into the watch’s underbelly. So, in addition to tracking your steps and recording workouts, the device can give you a beats-per-minute rating. Of course, some older Samsung devices like the Galaxy S5, Gear Fit and Gear 2 had similar capabilities, and none of them gave particularly accurate readouts. So I don’t have super-high hopes for the Gear S when we eventually try out a more polished unit, but I’m ever hopeful that Samsung has continued to tweak its algorithm.

As you can see, there are all sorts of things we can’t fairly test until we take home a final unit, like the kind you’d buy in stores. That won’t happen until sometime in October, when the Gear S becomes available. No word on price yet, or whether any mobile carriers will be selling it, but all will be revealed eventually. For now, check out our video walk-through if you haven’t already — it might be the closest you get to the device for a couple months yet.

Ben Gilbert and Zach Honig contributed to this report.