Home News With big ambitions, 120 Sports aims to be the internet's ESPN
News

With big ambitions, 120 Sports aims to be the internet’s ESPN

Despite being crowded by major networks such as Fox Sports, NBC Sports and, of course, ESPN, surely this space could still make room for one more. At least that’s what the new, young brand 120 Sports is hoping for. As opposed to the rest of them, however, 120 Sports isn’t trying to make broadcast TV its bread and butter; instead, it is seeking all-digital avenues to distribute video content, with a website and mobile applications that offer 24/7 sports coverage, live and on-demand. But, perhaps most importantly, it’s delivering content without requiring authentication from a cable or satellite provider, and that’s something made possible by having some high-profile backing.

Thanks to partnerships with Time Inc. and MLB’s Advanced Media branch, both of which have equity stakes in the network, 120 Sports is able to access copyrighted content to use in its daily, two-minute segments. Such content, produced at the Harpo Studios campus (Oprah’s old stomping grounds) in Chicago consists of roughly 10 hours of live programming every day, featuring on-air talent, like former NBA player Antoine Walker, and other guest analysts. Then there’s NHL and NASCAR on the content side, both also part of the project; Jason Coyle, president of 120 Sports, told us that the network is actively working to strike more programming deals with entities from other sports. Before doing any of that, though, Coyle believes it must win over you, the sports fan. “We want to listen [to the viewers] before we make our next move.” Coyle said. “It could be more programming throughout the day. It could be more social features. It could be more sports-specific programming.” 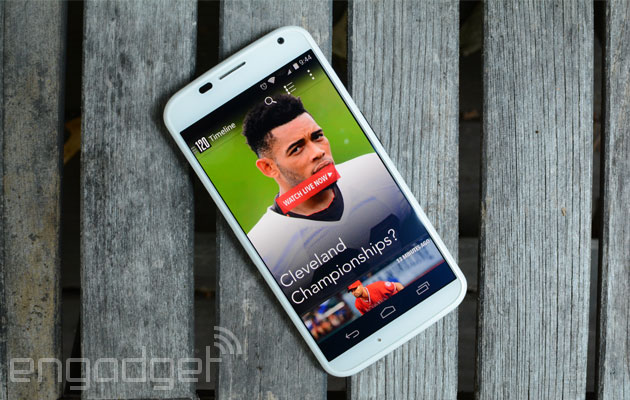 “Whatever we did, we needed to be fundamentally different than television, without also undermining [it].”

Those social features he’s referring to are key to the core of what 120 Sports is doing. The quick-bite shows on the network all use social media as a way to keep fans engaged — not just with what’s being discussed (news, highlights and more), but also the hosts and guests. “ESPN meets Twitter, infused with the soul and pace of digital, with great journalism and talent,” Coyle replied when I asked him to describe his network. In the grand scheme of things, 120 Sports may not be ready to compete toe to toe with the media heavyweight that is ESPN, not right now anyway. But that’s not something that necessarily concerns Coyle and 120 Sports. “We started with the initial premise that, whatever we did, we needed to be fundamentally different than television, without also undermining [it],” he stated. “We needed to create a product that was really different, with all the qualities, but also being social- and mobile-focused. Having editorial credibility was also important.”

“We just want to become part of the media diet of sports fans.”

Naturally, that “mobile-focused” mentality means having a footprint on smartphones and tablets. To do so, 120 Sports has had an iOS app since it launched last month, which was recently followed by the network’s arrival on Google’s Android platform. “As we go to Android, we’re looking to grow an audience base there and continue to expand our programming,” Coyle told me. “As we start to grow our audience, I think you’ll see us continue to expand our offering. We’re really excited about whatever might come next.” What’s ahead could, perhaps, be heading to streaming devices including Apple TV and Roku — or, better yet, adding support for AirPlay and Chromecast to its apps.

At the end of the day, Coyle told me that, for 120 Sports, it’s all about earning a way into each fan’s day, not about ESPN or any other existing sports network. “We just want to become part of the media diet of sports fans,” he stated. “We think we have a chance to become a trusted brand, right alongside the rest of them.”