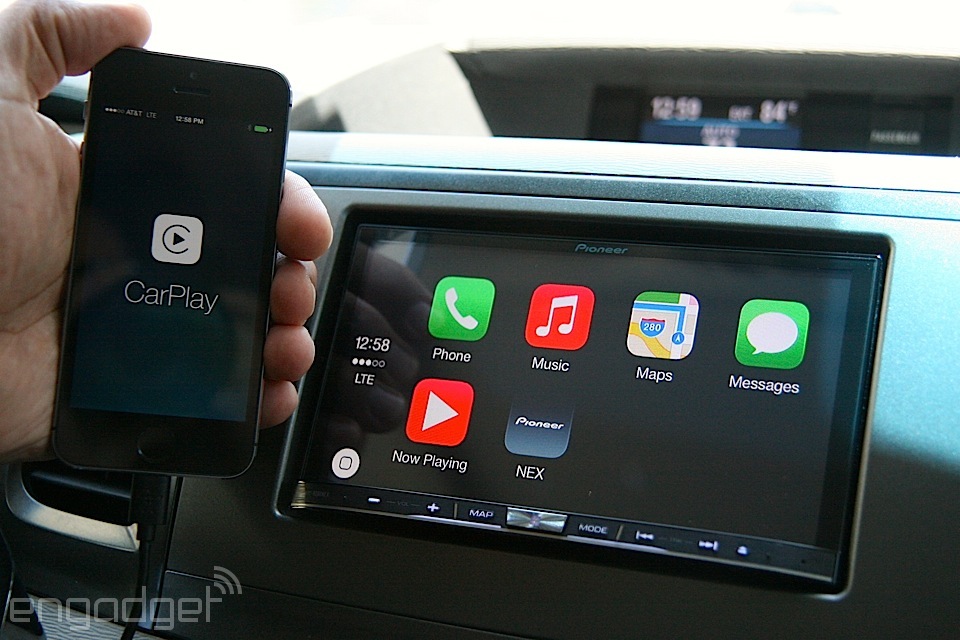 If you’re an iPhone user who’s dying to try out the new auto-friendly CarPlay interface, but can’t quite shell out the big bucks for a new Ferrari, Pioneer has good news for you: It recently announced that all of its 2014 NEX head units will be CarPlay-compatible. Indeed, if you already purchased one of Pioneer’s five aftermarket receiver models that were released earlier this year, you too can have CarPlay with a simple firmware update that’s coming out in a few months. I had the opportunity to see this in action with a Pioneer AVIC-8000NEX installed in a Toyota Sienna a couple days ago, and it’s exactly how it would appear in a car with CarPlay already built in.

All you need to get started is to plug your iPhone (it needs to be one with a Lightning cable) to the NEX unit and the CarPlay interface will appear. Just as we saw at the Geneva Auto Show in March, CarPlay’s interface mirrors that of iOS, even right down to the app icons. You’ll get access to the features that you want most when you’re driving around — voice calls, messaging, maps and music. The latter includes your iTunes library, of course, but CarPlay will also support third-party audio apps like iHeartRadio and Spotify at launch. Interacting with apps on the Pioneer head unit is the same as with a built-in system — you can either tap the screen or hit a button to activate Siri voice commands.

Ted Cardenas, Pioneer’s VP of marketing, took me on a little drive around San Francisco to get a real-world feel for CarPlay. What surprised me the most about the experience was how Siri really comes into its own as a way to deal with your phone while in the car. As an iPhone user, I’ll admit I almost never use Siri, preferring instead to just tap, swipe and type on the touchscreen. Of course, in a car, that’s a very unwise thing to do, which makes Siri invaluable. You can play music by saying, “Play,” and then the name of a song; make calls simply by saying, “Call,” followed by the person’s name; and say, “Read unread messages,” to prompt Siri to do just that. 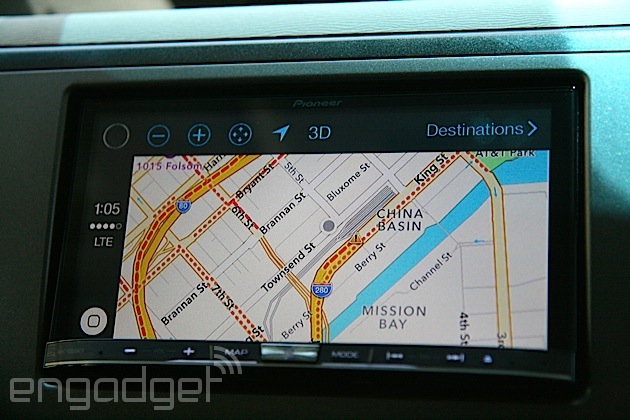 When you get a new message, CarPlay will temporarily mute the song you’re listening to and you’ll hear a slight, unobtrusive ping. From there, you can tap the new-message banner, at which point Siri will tell you who it’s from. To ensure safety, CarPlay will never display the full message on the screen and defaults to Siri reading it out to you. From there, you can reply to the message by saying something like, “Tell John I’m running late.”

And because Siri lets you use natural language, getting directions to a place is as easy as saying, “How do I get to,” followed by the name of your destination. Compared to most in-car systems, where you have to follow a strict voice script, like adding your city and state and having to spell out an address, Siri seems a lot more user-friendly. And because Siri is connected to your phone, you can use it for other functions too. Cardenas demonstrated that you can tap the Siri button to request reminders or ask for the latest scores of a baseball game. 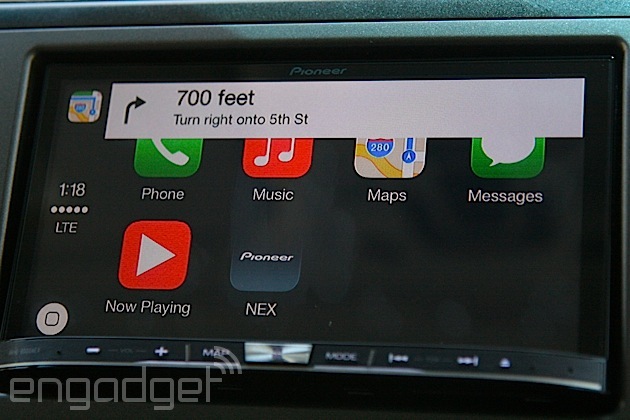 There are a few important caveats, however. For one thing, Pioneer’s NEX units won’t fit in every car. Vehicles that integrate climate control with entertainment, for example, can be difficult to accommodate. Further, some cars have steering wheel buttons that can be mapped to prompt Siri, while others don’t. You’ll still be able to use the touchscreen and the buttons on the Pioneer head unit, so it’s not a total loss, but the NEX’s compatibility with your car’s selector and volume controls can vary from manufacturer to manufacturer.

Last but not least, the Pioneer NEX receivers are not cheap. The cheapest — the AVH-4000NEX — will cost you close to $700, while the top-of-the-line AVIC-8000NEX is priced around $1,400 retail. That said, $1,400 is still a lot more affordable than getting a shiny, new luxury car from Ferrari, Mercedes or Volvo, especially if all you want is CarPlay. Pioneer tells us that if you bought a new NEX unit already, you can update it with a simple USB stick to get CarPlay, but if you wait until later in the year to get one — we’re hearing “early summer” — it’ll already be pre-installed. Until then, we suggest you peruse through the gallery above or view our hands-on below from the Geneva Auto Show to see if CarPlay is worth waiting for.

How to watch Turner & Hooch: Stream the 2021 remake online from anywhere