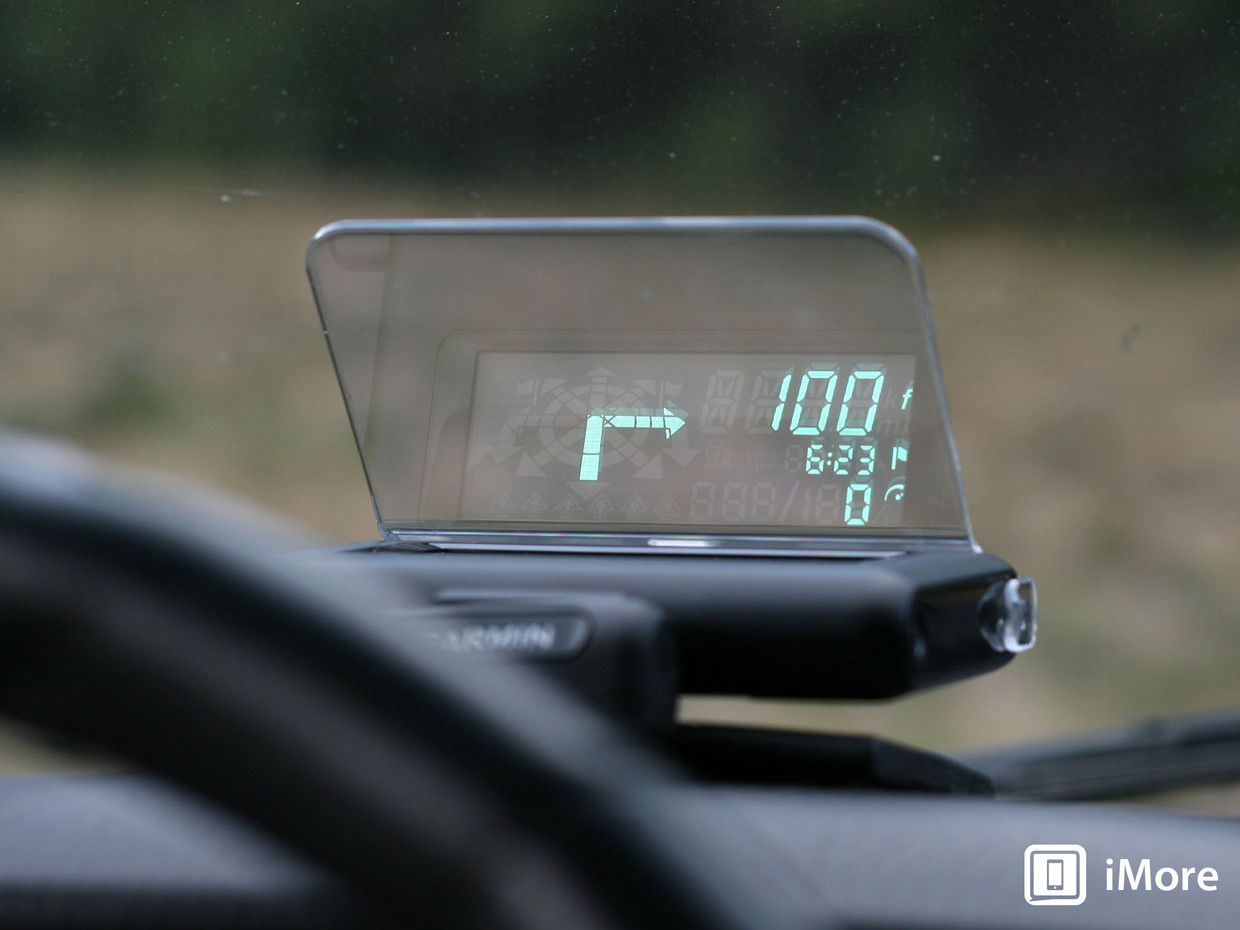 Up to now, Heads Up Displays have been limited to luxury cars and jet fighters. Now Garmin’s putting a HUD in the reach of anyone with a smartphone running Garmin’s navigation software.

When it comes to getting from point A to point B in your car, it’s nice to have a phone that knows the way. Garmin, the maker of GPS systems and mapping software, has developed a new Bluetooth accessory that should make it easier to get there: the HUD (short for Heads Up Display). Coming in September, the HUD works with iOS, Android and Window Phone 8 devices alike and gives your automobile a taste of jet fighter technology.

Garmin’s HUD rests on your dashboard. It measures 4.25 x 3.46 x .73 inches and weighs 9.77 ounces, making it larger and heftier than an iPhone 5. It’s clad in black plastic, and the top of the device houses a Vacuum Fluorescent Display (VFD) that projects a visible image onto your windshield.

The HUD is powered using a cable that plugs into the cigarette lighter or 12 volt power outlet in your vehicle; that adapter has a blue LED to show when it’s powered, and includes a USB power adapter that outputs 5 volts at 2.1 amps. Using GPS on a phone is a power-hungry activity, so it’s nice to be able to keep the phone’s battery topped off.

I tested the HUD with Garmin’s Navigon software installed on an iPhone 5 running iOS 6. The HUD synced with the iPhone like any other Bluetooth device, and didn’t impair the iPhone from pairing with my car’s stereo or other equipment. The HUD works with Garmin’s own navigation software – on the iPhone, that includes Garmin StreetPilot Onboard and Navigon. It’s worth noting that the HUD does not work with Apple’s own Maps software, nor does it work with Google Maps or any other navigational software. The HUD displays its imagery in bright green fluorescent characters – there are some red ones, too – warnings, in particular, to let you know when you’re exceeding the speed limit or if there are known traffic cameras ahead, for example (both of these warnings are optional). If you’re traveling on a freeway or multilane highway, it’ll also show you which lane you should be in.

Garmin rates the HUD’s brightness at 7,700 cd/m2. I don’t have equipment to verify, but I can tell you the HUD incorporates an ambient light sensor that automatically adjusts brightness for day and night. It was easily visible at all times of day, and the only time I had any trouble was if there was excessive glare right on the windshield near the HUD itself.

The images are projected directly onto the windshield and are visible using a transparent reflective film included in the package, which Garmin instructs to install by thoroughly wetting the inside of the windshield, sliding the film around to the right position and pressing out any bubbles in the process (sort of like applying a screen protector to your smartphone, minus the wetting part). I opted not to use the film, since we’re a two-car household, and only one film is included. Fortunately, Garmin accommodates by including an angled transparent reflector lens (pictured above) which clips directly on to the HUD. That lens can move around with the HUD.

The HUD’s base is flexible – a hinge lets you pivot and twist the HUD to get the best reflected angle on your windshield. The base bends a little and is rubberized and a bit sticky on the bottom, to help keep from slipping on different dashboard surfaces (it’s removable without any residue, and restickable – just clean the dashboard before applying).

Garmin made the bizarre decision to make the HUD and the base one integrated unit, so I couldn’t just unseat the HUD and toss it in a glove box for security without taking the whole base along with it. That meant needing to line up the HUD again just right the next time I used it. 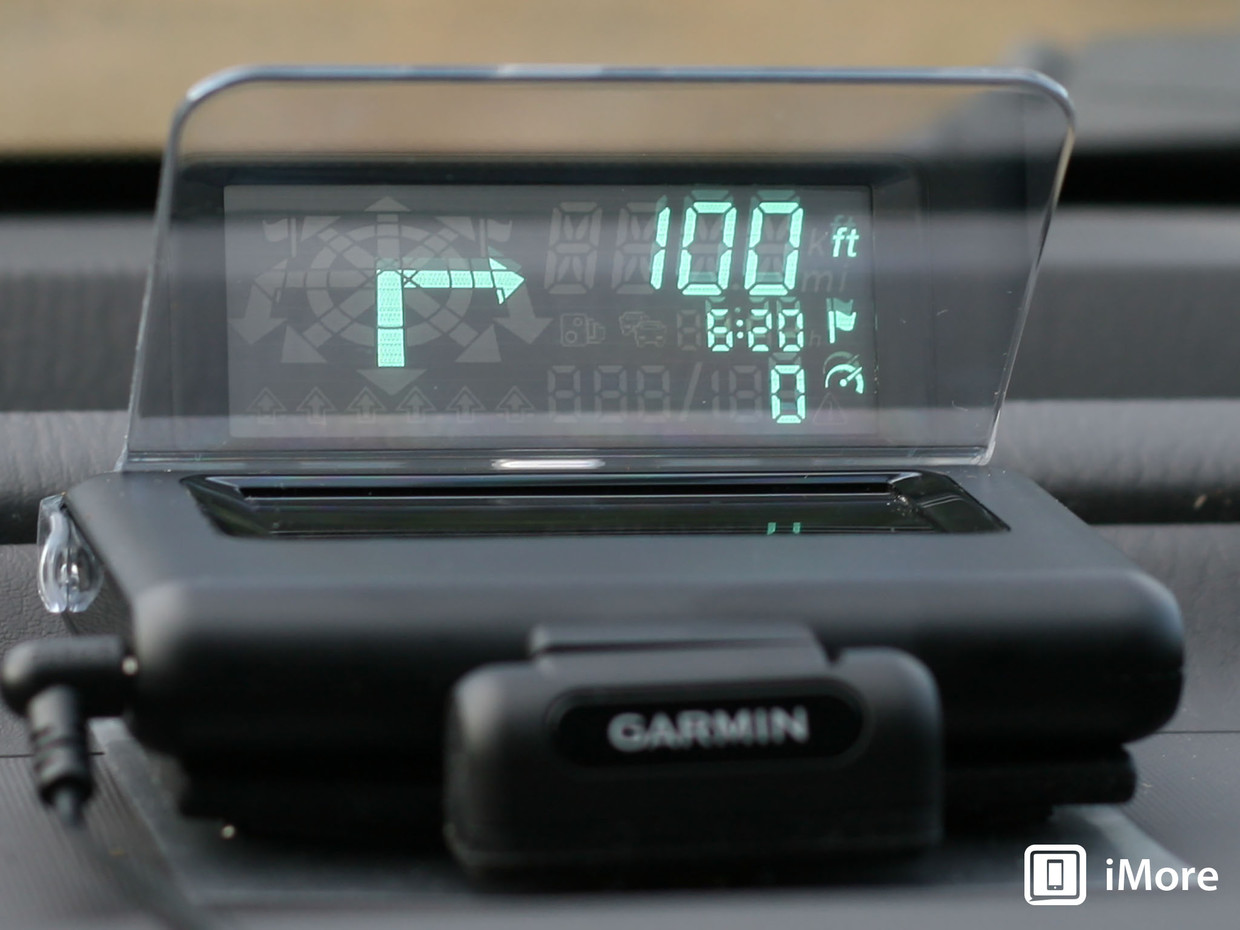 G Suite for Education is finally getting Smart Compose and Autocorrect

The two features combined can automate some of your writing duties.What you need to knowMonths after their availability on G
Read more
News

G Suite for Education is finally getting Smart Compose and Autocorrect

The two features combined can automate some of your writing duties.What you need to knowMonths after their availability on G
Read more