[GAME REVIEW] Magic 2014 – Duels Of The Planeswalkers: Magic The Gathering Finally On Android 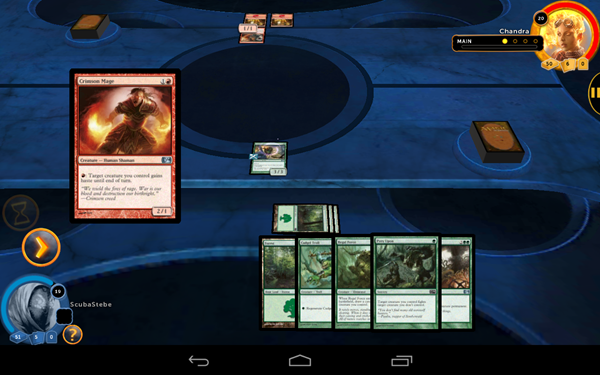 Magic the Gathering (MTG) is one of those card game franchises that has lasted generations and still going strong, having moved its game franchise onto mobile as well, MTG has finally reached the shores of Android with Magic 2014 Duels of the Planeswalkers. I’ve been waiting for a MTG game on Android for a long time now, having been subjected to another case of “iOS-first” syndrome; I am excited to say that MTG is on Android and it’s everything you could want from the first iteration on our platform; that’s not to say it’s perfect, but we’ll take it.

For veterans and those new to MTG, the Magic 2014 game begins with a tutorial that will walk you through not only the concept of the game, but also the game mechanics and how to operate the game. For someone who’s played the game before, but not in some years, the tutorial served as a great refresher, walking you through each card type and what each can do and when to use it. The tutorial also does a great job of walking you through the different controls of Magic 2014. 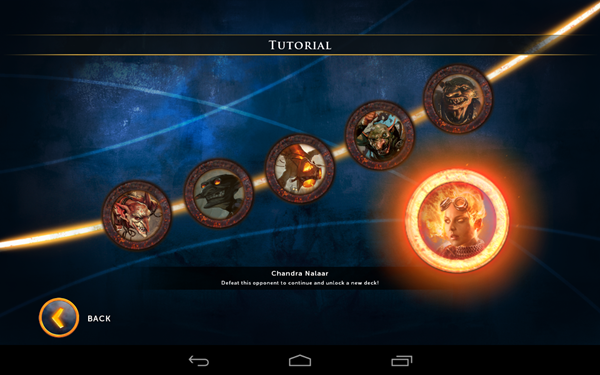 There aren’t too many card games on Android, but I have to say that Magic 2014 is probably the prettiest and the slickest with its controls and touch gestures. Attacking your opponent is as easy as waiting for the Attack phase, then dragging your finger from the creature you want to attack with to your opponent’s portrait; likewise, blocking is as easy as dragging from your creature to the creature you wish to impede. It’s a very intuitive control scheme, or at least, as intuitive as it gets without having the cards in your hands. 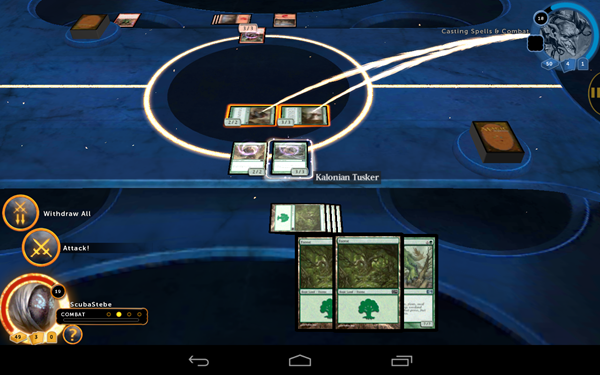 While the play space is wonderfully large so that you can see everything that’s going on, the text can get a little small at times, even on my Nexus 7. This can be compounded by tiny buttons which can be pressed accidentally trying to press something else, though this didn’t happen too often. While cards can sometimes seem a little far away sometimes, particularly your opponents cards, you have the option of double tapping their card and having a look at it up close. Alternatively, you can temporarily assume their view to see the battlefield from their perspective.

The UI in game is simple enough, though it would have been nice to see the life counter be a bit larger than it is now, possibly even overlaid with your avatar portrait.  The transitions in the game are also a nice touch, an odd flaming ball of fire flying around really gives the game a little extra flavour that you don’t get from playing with cards. 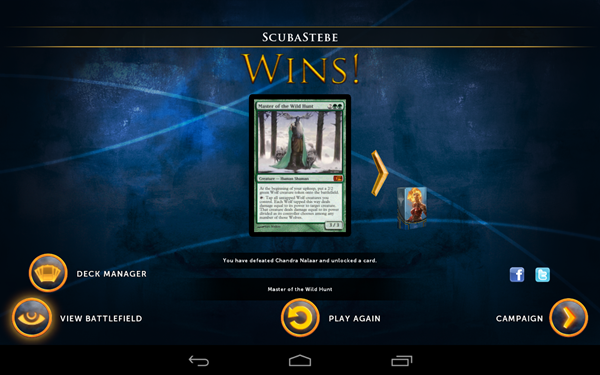 Magic 2014 also has an extensive list of modes for you to play including a campaign, challenges, multiplayer and Sealed Play. The game is free to download off Google Play (links are at the bottom) which will give you access to 3 decks, single-player campaign and the Sealed Play mode, however, if you pay the $9.99 for the Premium content package, you gain access to the full game with all decks, all campaigns, etc. 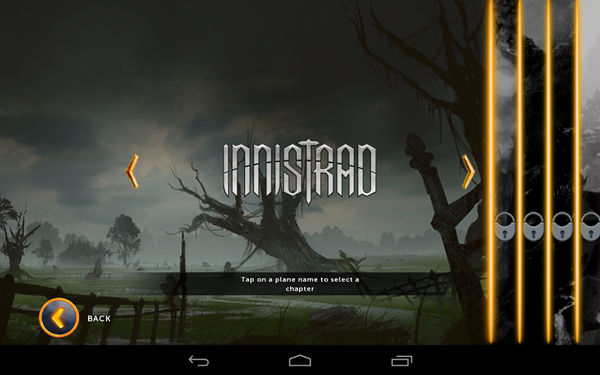 The campaign is straight forward enough, following an story arc which is related to MTG lore, pitting you against different opponents in stages as you try to complete each chapter/area. One thing that makes the campaign easier is the fact that each opponent selected from the chapter screen will perform the same actions every single time you play them, so if you lose the first time, you will know what to expect next time. You might say that this takes the fun out of expecting the unexpected, but it does mean that even if you have an inferior deck, you might be able to out-strategize your opponent.

Defeating opponents will net you new unlocked cards for your deck; your deck can then be customized in the Deck Manager accessible from the main menu and allows you to get up close and personal with each one of your cards and tailor your deck to your play style. 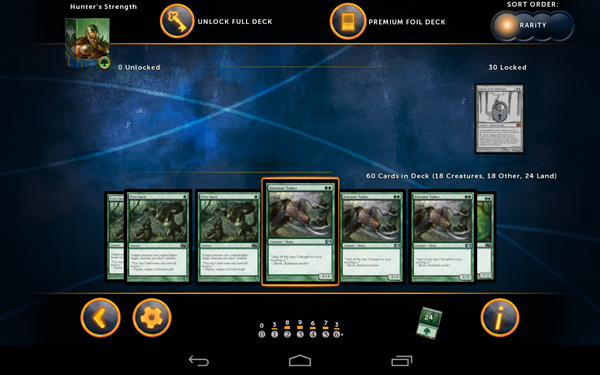 Challenges are as you’d expect: tailored scenarios where you have to triumph just with the cards you have on hand. The few challenges I did try weren’t terribly difficult if you thought about it long enough, but presumably they get much more difficult as you progress. Before we get onto the multiplayer, let’s cover the Sealed Play mode; the Sealed Play is a kind of equalizer, giving you booster packs to open and create your deck from cards that you’ve never seen from. After creating your new deck, you’ll face opponents and get new cards to try and upgrade your deck. It’s a great mode to learn to play with unfamiliar decks, one which would have been made great given online multiplayer. 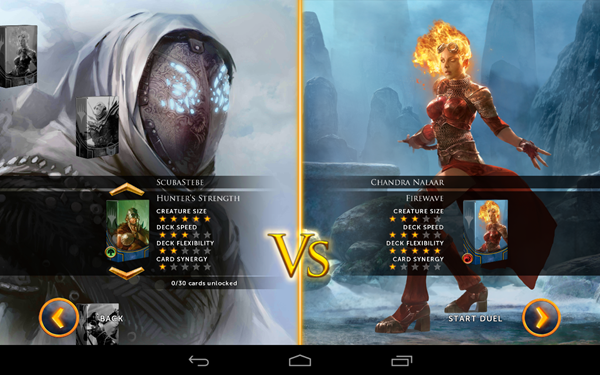 Which brings me to the biggest downside of Magic 2014 on Android; multiplayer is only possible via Bluetooth connection. While Wizards of the Coast have spoken about potentially shoehorning online multiplayer into the game, the Android version of the game remains the only version of the Magic 2014 without online multiplayer. Whether this is teething issues to do with the new platform or otherwise, it is a bit disappointing as this can potentially severely decrease your mileage with the game.

Magic the Gathering has finally made its wonderful debut on our beloved Android platform. It’s a well made game, and you can see the years of iteration have created a very slick, rich game for MTG fans to play with. The game would be perfect were it not for the lack of online multiplayer, but seeing as its an annual game offering, hopefully Magic 2015 will right this wrong.

If you want to check out Magic 2014 Duels of the Planeswalkers, hit the Play Store link below to pick it up and try.

Game: Magic 2014 Duels of the Planeswalkers