Some of you who follow Butterscotch Shenanigans will have seen them teasing their new game which is going to be called Captain!. For those of you who don’t know Butterscotch Shenanigans, they’re a bunch of guys responsible for such amazing mobile games as Towelfight 2 and Quadropus Rampage, which we have had an absolute ball playing with. Captain! will be following up these games in classic Butterscotch style with that quirkly humour that you love and don’t quite understand and their amazingly unique art style. 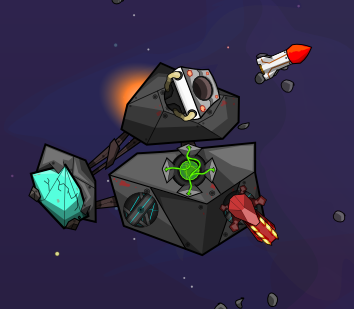 The fellows at Gamewoof were given an exclusive screenshot to show off earlier this week, depicting what appears to be a customizable ship which is presumably upgradable. Luckily for us, Butterscotch Shenanigans have been kind enough to give us another exclusive screenshot, just for you, our beautiful AndroidSPIN readers, one which they say is from their new mission system. The screenshot is below: 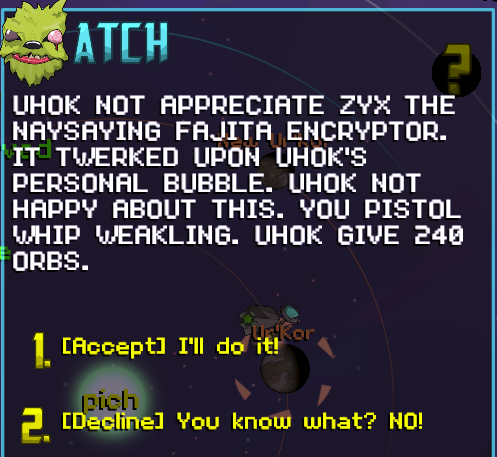 If you’re wondering what a U’HOK is, they will be 1 of the 5 playable races (which doesn’t necessarily imply there will only be 5 races). As you can see from the screenshot, you are receiving a mission from the U’HOK named Atch, who you have encountered on the planet Ur’Ror. We’ve been told that the missions that you’ll get in Captain! will be completely randomly generated, and as you can see from the screenshot, will be absolutely absurd; is he saying ZYX invaded his private space? It also looks like you’ll be meandering around some kind of star system map to get from planet to planet in your customizable craft. We should also note that this is from a very early build of the game, and the finish product will likely look different from this, but it looks like Butterscotch Shenanigans’ penchant for the weird is still alive and well.

Hopefully we’ll be hearing more about Captain! before too long, and judging by Butterscotch Shenanigans’ previous efforts, this is definitely one game to get excited about. Who else is excited about Captain!, or will I just have to pistol whip you?