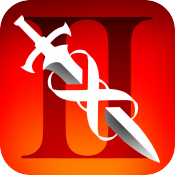 Last week, a number of popular apps went free in celebration of the App Store’s fifth anniversary, with Infinity Blade II among them. According to publicist Laura Mustard, who spoke to AllThingsD, Chair’s hit action RPG scored 5.7 million new players during the seven day promotion.

That amounts to three times the normal number of downloads that the game earns in a week, which could earn Chair quite a bit of revenue in the form of in-app purchases. Infinity Blade II offers players bags of gold to speed up item acquisition and gameplay.

Like many other games (most of them free-to-play), the normally $6.99 Infinity Blade 2′s revenue is bolstered by in-app purchases of virtual gold currency. With a couple million players who got in the door for free, it doesn’t take an economist to wonder if they might be in a gold-buying mood.

However, Mustard downplayed the importance of in-app purchases for the game. “While we normally notice an increase at times when we’ve done free promotions, we don’t think it’s significant, because the game is balanced in a way that does not require any IAP,” she wrote in an email.

Chair’s original Infinity Blade game, priced at $2.99 during the App Store sale, also saw 2.5 times as many downloads as the week before and a related e-book, Infinity Blade: Awakening had a 70% increase in sales.