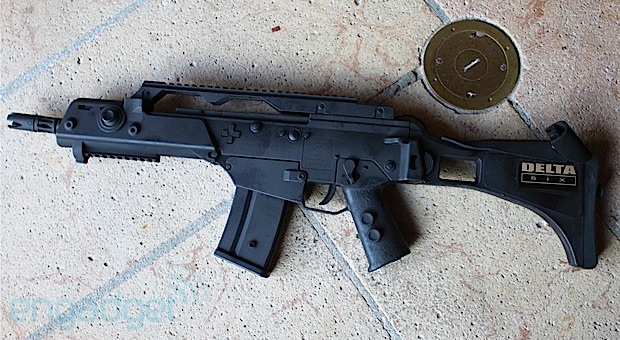 The Delta Six gaming controller first hit Kickstarter last fall, but the plug was pulled from the crowdfunding effort by its creator David Kotkin, as he reckoned it wasn’t on track to generate enough support. With hardware and software refinements made over the last few months, the peripheral has just been relisted on Kickstarter. In case you need a refresher, the peripheral puts a premium on realism and motion-enabled gaming. Thanks to accelerometers, gyroscopes and buttons in odd places, users can do things such as bring up in-game sights by looking down the plastic rifle’s barrel, or steady their shot by pulling the faux weapon close to their arm.

Now, the campaign is asking $159 for controllers with black or white paint jobs and orange tips, as a second look at production costs indicated the project’s original $89 price tag was too low. This time around, the funding goal has been locked in at $100,000, instead of a cool half a million. As for internals, the shooter is toting an Arduino, which opens up the hardware to software updates and customization. Not only will the blaster work with PC, Xbox 360, PlayStation 3 and the Wii U, but it’s set to boast compatibility with next-gen consoles through an update, to boot. If the Delta Six reaches it fundraising mark, it’ll ship out to supporters in December. Check out our hands on with the contraption or head past the break for Kotkin’s video pitch.