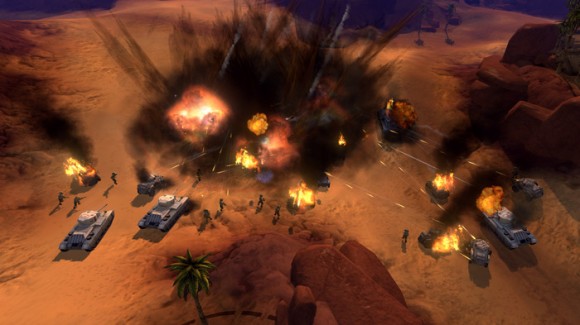 The game is a World War II team-based action-strategy game where players are able to collect companies of units and battle in fast online matches. The project is seeking $700,000 for development and has 28 days to go before it funds. So far, 276 people have backed Victory and the game has raised $16,373.

The game offers online team versus team battle arena and allows users to choose units from their collection to bring in each match. Players command squads using RTS style controls and viewpoint, but Victory isn’t a RTS game. Players don’t focus on base building or resource management. The game will be available for Windows gamers and the developer is clear in stating that the game is not free to play.

Players earn currency in the game allowing them to buy booster Commander Packs that have random units and other items. Matches are won by using your units to capture and hold key points on the map or by destroying all enemy units. A typical match will last 15 to 20 min. Check out the video below to see more of the game in action.

Staples is practically giving away the Microsoft Surface Pro 7 today

Google clamps down on climate change misinformation from creators, ads