HomeNewsUkrainian killer dolphins are on the loose
News

Ukrainian killer dolphins are on the loose

So apparently the Ukrainian Navy trains killer dolphins. That’s not the most shocking news you’ll hear all day. Apparently 3 out of the 5 killer dolphins that they have trained have run away from base, presumably to look for a mate to hook up with (at least that’s what experts believe). The dolphins took off during a training exercise held at Sevastopol Aquarium around February 24th. They’re equipped with pistols and knives, and yes, they know how to use them. 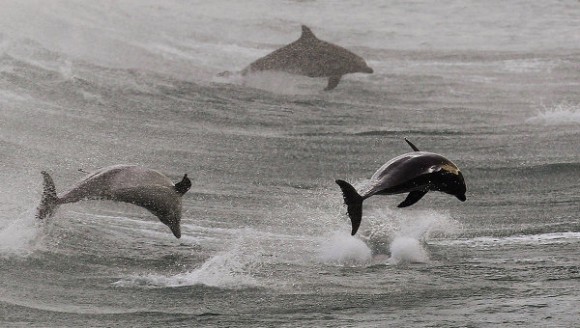 They are currently swimming around in the Black Sea in search of some other dolphins to mate with. Yury Plyachenko, a former Soviet naval anti-sabotage officer, stated that this is typical behavior coming from male dolphins. It is mating season, and they usually come back within a week. That’s not exactly reassuring since it’s been about 2 weeks and 2 days since the dolphins took off.

Before they were trained to be killers, these dolphins were in charge of civilian tasks like rehabilitating disabled children. The Ukrainian’s decided to re-train these dolphins in order to fend off enemy combat swimmers. They were fully trained to use weapons strapped to their heads. The dolphin training program originated in the USSR, and there they were taught how to find mines, or plant explosives onto enemy ships. After the breakup of the USSR, the dolphins were given to the Ukrainian Navy.

The Ukrainian Defense Ministry were quick to call these reports a lie. They stated that they were just “fabrications” and “gross provocations”. While that would be a good counter-argument, the killer dolphin training program has been caught on various Ukrainian media reports. Whatever the case may be, civilians (and ships) should probably stay away from the Black Sea for a little while.

Ukrainian killer dolphins are on the loose is written by SlashGear.
© 2005 – 2012, SlashGear. All right reserved.