A team of international researchers, lead by Emanuele Farina from the University of Insubria in Como, Italy, have discovered a rare, quasar triplet about 9 billion light years away from Earth. The quasar triplet has been named QQQ J1519+0627 and is only the second triplet to ever be found. The researchers believe that the galaxies that these quasars are a part of may be merging together in order to form one, enormous galaxy. 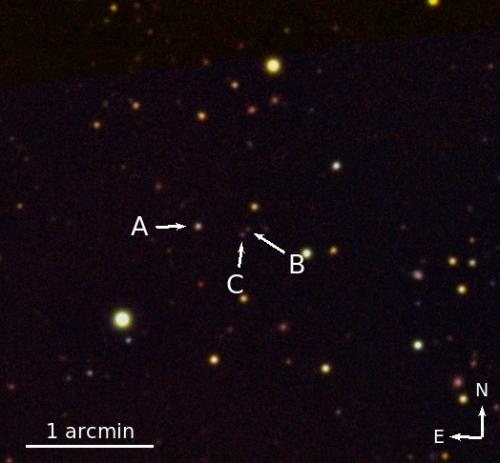 A quasar, or a quasi-stellar radio source, is a very bright and powerful celestial object. It is at the center of a galaxy and is surrounding a supermassive black hole. The quasar is powered by the accretion disc around the black hole. The scientists have found that two of the quasars in the triplet are much closer to each other than the third. They believe that those two quasars were the first to create the triplet quasar system, and that the third quasar is part of a much larger structure that’s still undergoing formation.

Michele Fumagalli, an astrophysicist at the Observatories of the Carnegie Institution in Pasadena, said, “Honing our observational and modeling skills and finding this rare stellar phenomenon will help us understand how cosmic structures assemble in our universe and the basic processes by which massive galaxies form.” The system is difficult to observe, however, due to their distance. It’s difficult for the scientists to distinguish the quasar triplets from the other different astronomical bodies nearby.

The scientists believe that the three quasars are close enough that their halos of dark matter are touching each other. Fumagalli, Farina, and the team of scientists have published their findings in the Monthly Notices of the Royal Astronomical Society. They are currently studying the quasars and trying to figure out how rare a triplet formation is. They are also looking around the universe to see if they can find more quasar triplets.