I mentioned earlier this week that there would be a comet visible with the naked eye in the night skies that would be viewable for people in the northern hemisphere. The comet is called Pan-Staars and tonight is when the comet will be at its brightest and most visible to the naked eye. Astronomers say that people should look next to the crescent moon in the twilight sky just before sunset. 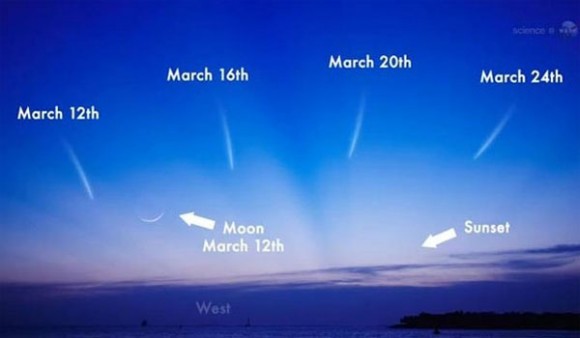 We even have this handy little graphic, which you see above, to show you approximately where to look as the Earth moves between tonight and March 24. Viewing this comet with the naked eye is a big deal because scientists estimate that the ability to see a comet in the sky without the aid of a telescope or binoculars only comes around once every 5 to 10 years. This particular comet may not return for another 100,000 years.

Anyone who lives in the northern hemisphere and can see the nighttime sky without cloud cover or too much light pollution should be able to get a glimpse at the comet starting tonight. People in the US who live in the southern states will need to look slightly lower on the horizon than those who live in northern states.

With clear skies over much of the southern United States, tonight should be ideal viewing. You can watch the video below to get a better idea of where to look to see the comet for yourself. Pan-Starrs was discovered in June of 2011 using the Panoramic Survey Telescope and Rapid Response System in Hawaii, which is where the comet name comes from.