Information workers in the enterprise sector would like a Microsoft tablet but an Apple phone, according to Forrester Research’s annual Mobile Workforce Adoption Trends survey of 10,000 enterprise staff (via AppleInsider). 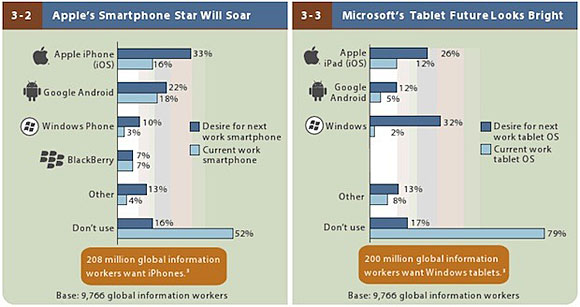 Notably, 79% of respondents said that they don’t currently use a tablet for work purposes, with only 17% saying that they’re not interested in using one, suggesting that there remains a substantial market opportunity should companies be willing to support tablets.

The Surface tablet has so far received a generally lukewarm reception, with many taking the view that trying to be both a tablet and a laptop left it compromised in both roles, so Microsoft will undoubtedly be encouraged by this evidence that it may yet succeed in the enterprise sector.