A Mac client for EA’s digital distribution platform Origin was launched today, as first noted by AppleInsider. Origin for Mac was originally announced in August 2011 and went into alpha testing in late January.

Origin is quite similar to Valve’s Steam and allows users to download games and demos, chat with friends and continue saved games from most computers. 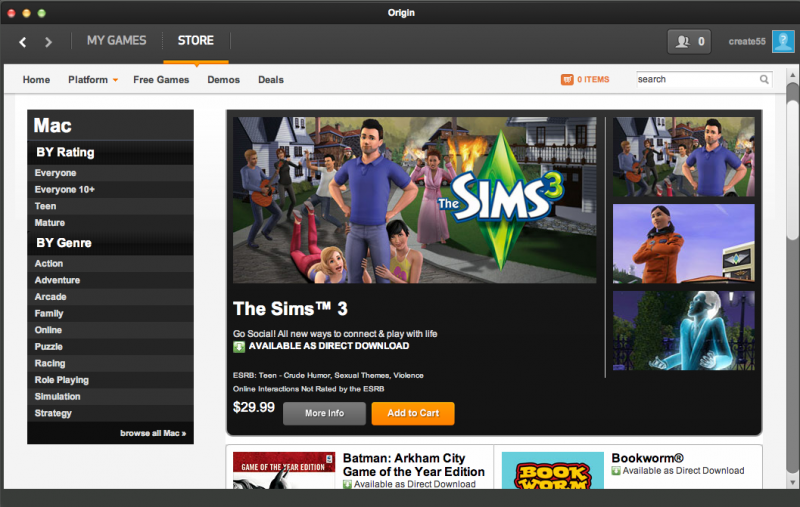 The store currently lists 48 Mac games available for download, including games like Batman: Arkham City Game of the Year Edition, LEGO Batman, Harry Potter and Star Wars, Tropico 3: Gold Edition and The Sims 3 and its plethora of expansion packs. The new SimCity is supposed to launch a little after the March release of the PC version of the game.

“We’re seeing increased activity from our Mac gamers,” he said. “In the past, we’ve brought games slower to market for Mac than for PC partly because the audience hasn’t been at the same level. The growth of iOS and Mac devices, though, means we’re starting to see gamers demand to play their games on devices that are becoming more prominent. I think, across the board, developers have focused on the PC platform, but I think you’re going to start seeing some changes there. [Origin] is the first step in a strategy you’re going to start seeing coming out of EA.”

Origin client for Mac is available as a download for free at EA’s Origin website. It requires OS X 10.6.8 or higher and an Intel Core 2 Duo Processor.