HomeNewsAT&T and The Cloud join forces to offer 1GB of free roaming...
News

AT&T subscribers who venture overseas to the UK can now utilize a free gigabyte of roaming data thanks to a deal with The Cloud. By downloading its Wi-Fi International app, those who have the right International data package through the carrier can authenticate to 16,000 wireless Internet hotspots located throughout the United Kingdom. Check out the particulars, as well as a few screenshots, after the jump. 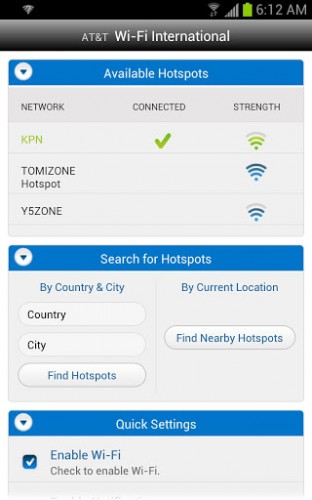 The deal allows AT&T subscribers who have Data Global Add-on with Wi-Fi to download the Wi-Fi International app and use it to connect to compatible wireless hotspots. The app is available for both Android users via the Play Store (version 3.2 or higher for tablets and 2.2 or higher for smartphones) and iOS (version 4.3 and higher) users via the App Store.

The obvious issue here is that those without the International add-on will have to subscribe to it in order to take advantage of the free 1GB of wifi data, something that doesn’t seem worth it for such a relatively small amount. The most appeal then will likely fall to those who travel to the U.K regularly and don’t want to be dependent entirely on mobile data connections.

Those who download the Wi-Fi International app will be able to connect to hotspots without having to deal with usernames and passwords. A notification will be given when a partner hotspot is within range of the user’s device. And, of course, users will be able to search for nearby networks based on the country and city they are located in.

[via The Next Web]

AT&T and The Cloud join forces to offer 1GB of free roaming data in the UK is written by SlashGear.
© 2005 – 2012, SlashGear. All right reserved.