Being a college student, it’s often hard to stay organized. My goal for this semester is to be more organized, prepared, and on top of things, and I couldn’t do that without some help. A few weeks ago, I ran across Any.Do on Google+. I’ve since lost the original post, but it caught my eye in a screenshot, so I jumped over to the Google Play Store to check it out. Now, I’ve used other to-do list apps in the past, but none of them ever really worked for me. They either didn’t have the functionality I needed, or they were just plain unattractive. Any.Do knocks both of these out of the park with a simple, minimal design and great features. 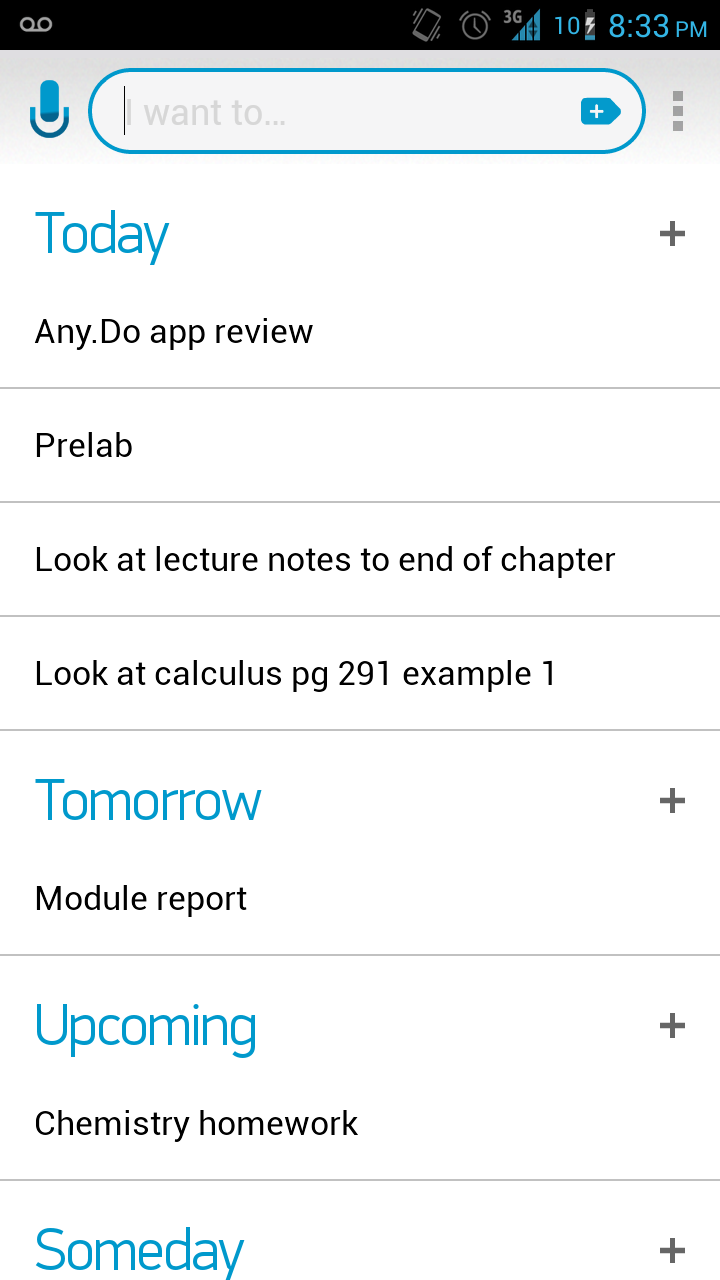 I was surprised by the simplicity of Any.Do as soon as I opened the app. Users are greeted with a simple list broken into four sections: Today, Tomorrow, Upcoming, and Someday. Obviously each of these has their own purpose, and users can move tasks from one to the next as they please. So if I don’t find time to do my prelab today, I can move it to tomorrow. Creating a task is easy and intuitive. Just start typing in the bar at the top, and Any.Do will start predicting your task, whether it’s “buy groceries,” or “take out the trash.” Even contacts show up when typing, making it easier to assign tasks to certain people. For example, I could type “dad,” and Any.Do would give me options like “Call dad,” or “Meet dad.” It just makes sense, and it’s done very well. Once users have finished typing the task, a simple tap of the blue icon at the right of the text bar is all that’s needed to add the task to the list. Any.Do has also integrated a voice button, so you can speak your tasks if you’re in a hurry. Within the app, users can mark a task as done by simply swiping to the right on that task. If this is done by accident, the user can simply swipe back to the left to undo the mark. Tasks that have been marked as complete move to the bottom of the list, and have a line through them to indicate their completion. Again, it’s a simple concept done very well. 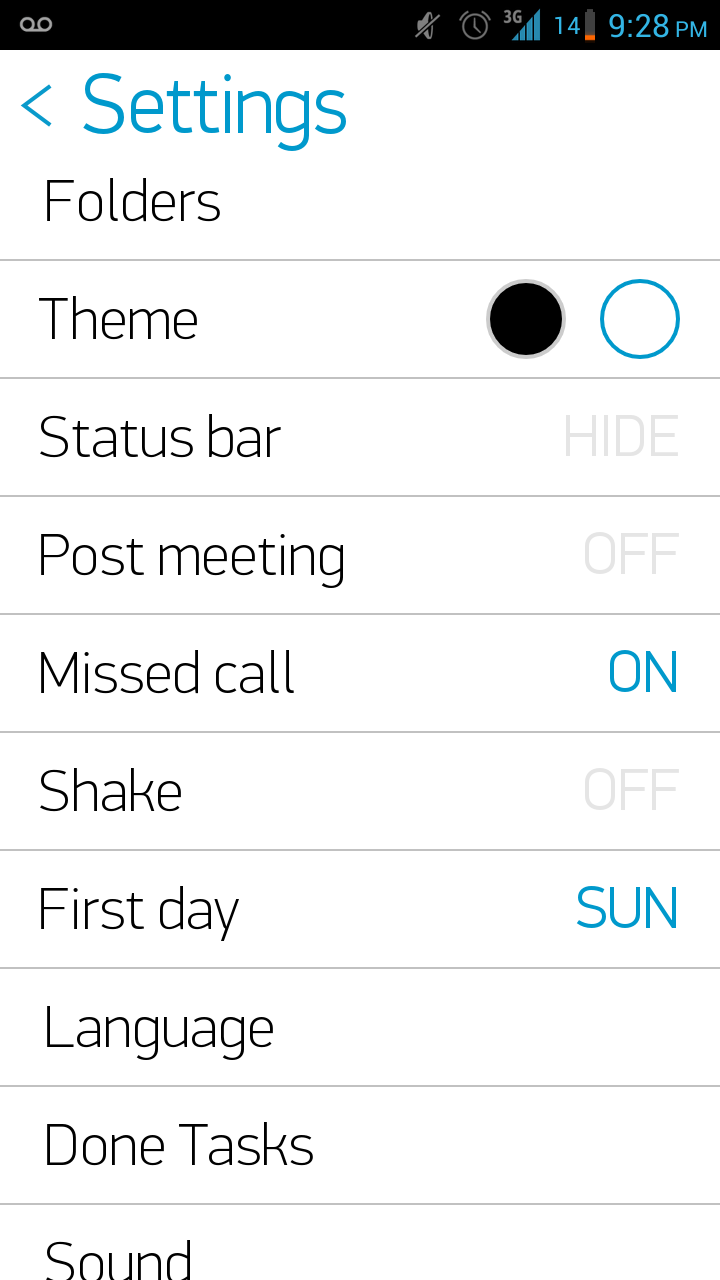 The settings for Any.Do are about as simplistic as the app itself. Users can create and edit folders for certain tasks, like Personal and Work. There’s also an option to change themes (there are only two: light and dark), as well as enabling or disabling a constant notification for tasks, missed calls, etc. Users can also enable shake-to-update, and set the first day of the week. Moving down the list, the language can be changed, as well as notification sounds. Any.Do has also added a list of tasks that have been marked as “done,” and users can unmark them or delete them. Finally, users can create backups, just in case. 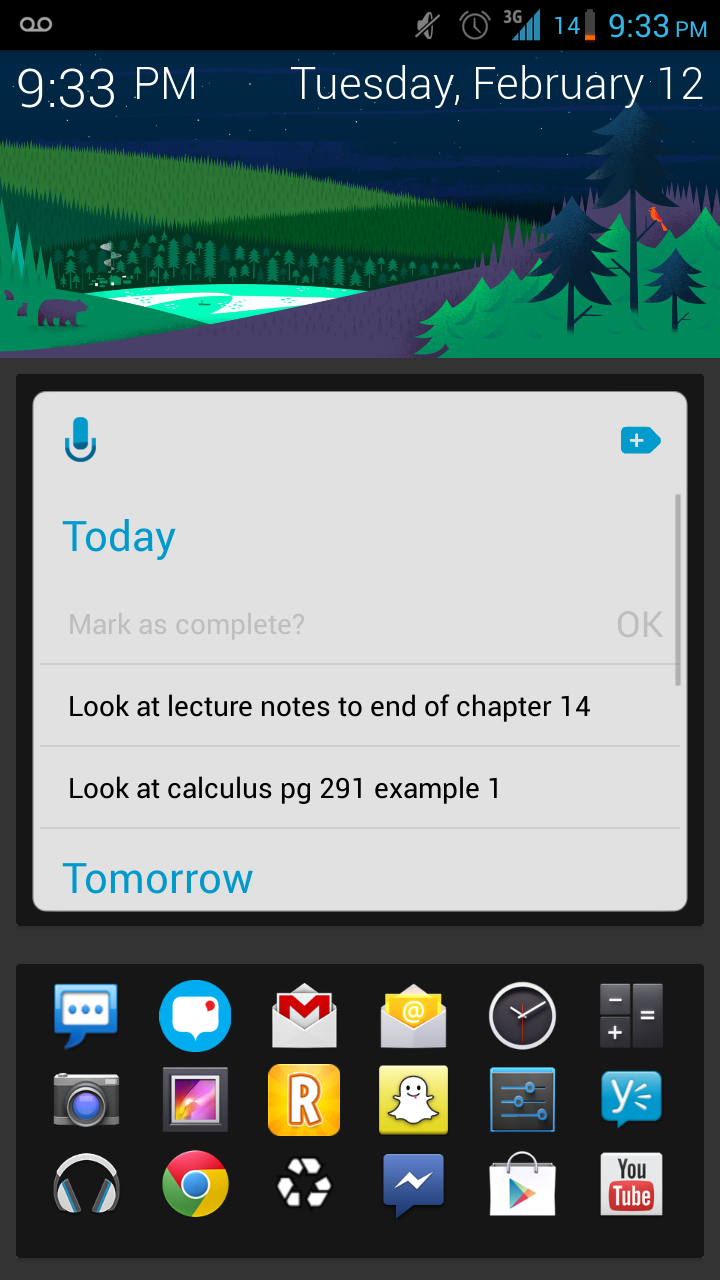 One of my favorite features of Any.Do has to be the list of widgets. There are five widgets, although I’ve found the scrollable 4×2 widget to be the best for my needs. These widgets are both simple and useful, just like the app itself. Users can mark tasks as complete, scroll down the list of tasks, and jump right into adding a new task. Unfortunately, adding a new task directly from the widget isn’t possible, as it jumps into the app to do so. The widget follows the theme of the app, so you won’t have a dark-themed app and light-themed widget at the same time. Having a widget on my homescreen is a constant reminder of what I have to get done, and it keeps me on my toes.

Any.Do is an amazing, simple, functional to-do list app that just works. There aren’t a bunch of hoops to jump through, users can enjoy a minimal UI, and it’s just very easy to use. I’m glad that I came across this app, as it’s helped me get more organized and stay on top of what I have to accomplish. Of course, Any.Do could be used as a simple grocery list, or for many other purposes. But if you’re looking for a great to-do list app, look no further. I’ve been blown away by the simplicity and usefulness of Any.Do, and it’s going to remain installed on my devices for quite some time. If you’d like to give Any.Do a try for yourself, you can download it below.

In an age when cleaning wipes and hand sanitizer aren’t easily found, it’s a little tough to keep your personal items and space clean. Not wiped down and washed, but free from germs and bacteria.Rather than fighting your way through a store to find only to find out there are no wipes left, take a smarter approach. The SANITECH UV-C Wand, on sale for just $72.99, is the sort of thing you buy once and get to use over and over. Try that with those Clorox Wipes.About the size of an electric toothbrush, the SANITECH UV-C Wand emits a UV-C light that kills 99.9% of germs and bacteria within ten seconds. It cleans all sorts of surfaces, including clothes, bedding, phones, keyboards, laptops, and more. If your hands touch it, you can probably clean it with the SANITECH UV-C Wand.FeaturesUV-C light kills 99.9% of germs, bacteria, & viruses within 10 secondsChemical-free for your safety & can be used on baby products, cosmetics, pet supplies, on home and public spacesLasts up to 90 minutes w/ full chargeBuilt for travel & convenienceBuy it NowPurchase the SANITECH UV-C Wand for just $72.99, a savings of 18% off the normal $90 price. Choose from Winter White, Flamingo Pink, and Seabreeze Green.Best SellersEarn Credits!For every $25 you spend in the AG Deals Store you get $1 credit added to your account. And, if you refer the deal via social media or an email that results in a purchase, you’ll earn $10 credit in your account.First Time Buying?If this is your first time buying, you are also eligible for 10% discount! Just be sure to subscribe for email updates.Free StuffNot looking to spend any money today? No worries. You can still visit the AndroidGuys section for freebies and pick something anyhow.
Read more
Reviews

Motorola One Fusion+ comes to US for $400

Motorola on Tuesday announced that its One Fusion+ smartphone will be available for US  buyers starting on August 5. Sold direct to consumers, the unlocked handset will retail for $400.Already available in India and Europe, the phone packs a 6.5-inch FHD+ display, 6GB RAM, and 128GB storage. A Qualcomm Snapdragon 730 processor powers the experience with help from Android 10.Around back there are four cameras, a 64-megapixel primary sensor, 8-megapixel ultra-wide lens, a 5-megapixel macro, and 2-megapixel depth sensor. The front of the phone has a pop-up 16-megapixel selfie camera.A 5,000mAh battery packs enough juice to keep things running for two days at a time. Rounding things out are a rear fingerprint reader, USB Type-C charging, a 3.5mm headphone jack, and a microSD expansion card slot.The Motorola One Fusion+ is built and priced similarly to the recently introduced Google Pixel 4a. In other words, it’s got all the power one might need for a daily driver and it comes at a cost many can afford.
Read more
Reviews

Aipower announced the Wearbuds last June, which, as the name suggests, were true wireless earbuds attached to a fairly basic smartwatch. We thought the Wearbuds were fine in our review, but we looked forward to a future iteration as first time products are bound to have issues and shortcomings.Now, those wishes have come true with the announcement of the Aipower Wearbuds Pro.The Aipower Wearbuds Pro boast enhanced sound quality with a Graphene Dynamic Driver, Qualcomm aptX audio, Bluetooth 5.0, and ability to be used independently of one another.The watch itself has heart rate, sleep, and fitness tracking as well as notifications, music playback, and ability to accept or reject calls.The Indiegogo campaign is available here for an early adopter price of $89. Units are expected to ship in October.
Read more