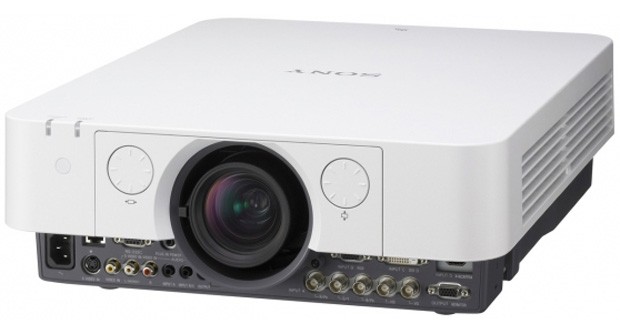 Sony doesn’t always break ground on new technology, but it tends to go big when it does. The company’s new installation-grade Laser Light Source Projector (similar to the VPL-FH36 you see here) serves as a textbook example. While it’s far from the world’s first laser projector, it’s reportedly the first with a 3LCD laser — enough to put its 4,000-lumen brightness toward the front of the pack, and help with visibility in less-than-dark boardrooms. Details are scant beyond the projection system itself, although Sony does tout a presentation-friendly 1,920 x 1,200 resolution as well as a picture muting option that gets the show started quickly. We do know that the well-lit output will be tough to miss when the Laser Light Source Projector hits classes and offices in the summer.

Basingstoke, January 29, 2013: Sony has today announced at ISE 2013 that it is launching its next generation WUXGA installation projector with Laser Light Source Technology. This ground-breaking product from Sony will be the world’s first 3LCD laser, 4,000 lumens WUXGA (1920 x 1200) projector, making it the brightest projector of its kind and a first for the industry.

This new addition to Sony’s installation projector line-up follows the award winning and popular design of the VPL-FH31 and VPL-FH36 models, part of the F series which is widely considered to be the top product within its category in Europe. The chassis is designed for optimum flexibility with a clean white finish designed to blend in with its environment.

The Laser Light Source Projector is free from the worry of lamp change with its increased durability and low total cost of ownership (TCO). With newly developed BrightEra[TM] 3LCD technology, the projector has up to 20,000 hours maintenance free time depending on the projector’s environment and setup conditions. This feature, based on market feedback, is especially important in the corporate and education sectors where the projector is used for extended periods of time.

“This announcement marks an exciting shift in the market. Sony’s pioneering technology delivers on the promises made to our key partners to produce innovative products that perform and exceed market demands. Installation projectors not only have to reproduce the highest quality images but also be relatively maintenance free and eco-friendly. The Laser Light Source Projector delivers on all accounts being mercury free, offering an incredible brightness of 4,000 lumens,” said Robert Meakin, Business and Education Product Manager, Sony Professional Solutions Europe.

Based on Sony’s Laser Light Source Technology, the projector incorporates lasers, rather than LEDs, to achieve optimum brightness. The white light, like traditional UHP light sources, is directed into the 3LCD engine to deliver incredible picture quality. As a result, the Laser Light Source Projector has substantially brighter images, better contrast ratios and outstanding colour stability.

The projector also features a picture muting mode which allows the user to quickly start the presentation once the mute mode has been turned off. This feature enables the smooth presentation of images with high colour reproduction. The Laser Light Source Projector also delivers amazing installation flexibility as it is tilt free with an efficient portrait mode to ensure the projector is entirely user friendly for both corporate and education markets.