Sony Entertainment Network Online Store for games, movies and more heads to the US 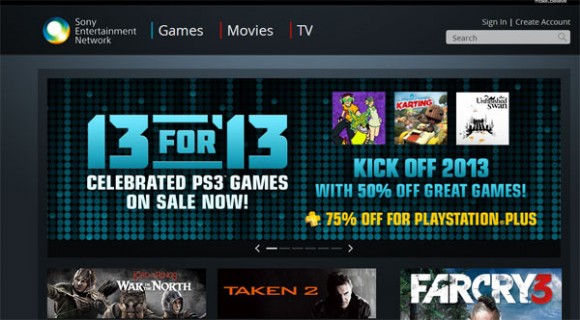 Sony promises that the new online store offers rich and detailed product pages making it easy to browse the store catalog containing what Sony claims to be millions of pieces of game-related content. The game content includes downloadable games, add-on content, and themes. The store is accessible through the PS3 and content can be purchased online via computers.

Content purchased using a computer for the PS3 will be added directly to the My Downloads area within the PlayStation Store. The content is also accessible using the PlayStation Vita or the PSP. The content also includes movies and TV episodes available through the online store that can also be watched on any Windows computer via the Media Go application for Windows PCs.

The movie and TV content can also be viewed on Android-powered Sony Xperia smartphones and tablets. Sony says that this online store was first offered in Europe in December. As of January 24 the store is available in the US, Canada, Mexico, and Brazil. Sony announced not long ago that people can also find their account wallet using PayPal and those wallet funds can be used to purchase any content from the new online store.

Sony Entertainment Network Online Store for games, movies and more heads to the US is written by SlashGear.
© 2005 – 2012, SlashGear. All right reserved.

How to view your match results and statistics in PUBG Mobile

Samsung Galaxy Note 20 Ultra one year later: Is it still worth buying?