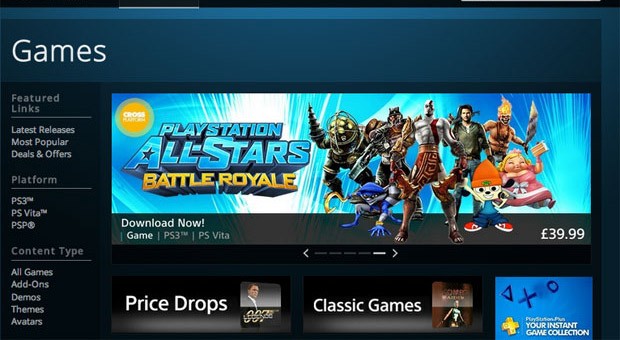 As promised, Sony’s delivering its web accessible Sony Entertainment Network store before the end of January, today lighting up the store for North Americans and Brazilians. Beyond just games, you can snag any content available on SEN and snag it later for full download and install on your PlayStation 3, Vita, PSP, and Xperia devices. Sadly, it’s not anywhere near as convenient as its Xbox 360 equivalent — after queuing up downloads, users have to dig around in the My Downloads section of their XMB and manually select which content to pull down. Still, a step in the right direction (and only two months after Europe got the service). Head over and check it out right here.

Features Simple Navigation and Convenient Way to Discover and Purchase Content Via the Web for PlayStation 3, PlayStation Vita, Sony Android Devices, and PCs

The new online store features rich product pages that offer an easy way to browse the store’s integrated catalog, which offers millions of pieces of game-related content – including downloadable games, add-ons and themes, as well as movies and TV shows1. With an unprecedented amount of content now available in the PlayStation(R)Store (PS Store), the online store delivers a convenient and visually compelling destination for users to access, discover and enjoy digital entertainment.

The launch of the online store follows the recent release of the new PS Store for the PS3 system and is part of an on-going initiative of redesigning the various device user experiences. Sony Entertainment Network will continue to update the PlayStation Store and online store with new features that improve usability and convenience for finding, purchasing and accessing content. For example, users of the new online store can look forward to the future addition of advanced recommendation functionality and automatic remote download of purchased content, as well as mobile phone and tablet browsing.

The online store was first available in European territories in December 2012. Today, the online store expands to the United States, Canada, Mexico, and Brazil. The new online store can be accessed at https://store.sonyentertainmentnetwork.com.

Playing Games While in Lockdown: Our Top Picks