If you’ve yet to jump into the God of War series, then boy does Sony have the bundle for you. Today the company announced that it will be bringing its recently revealed Garnet Red PS3 to North America as part of a new God of War bundle. This bundle will feature the latest game in the series, God of War: Ascension, along with every other game in the franchise. 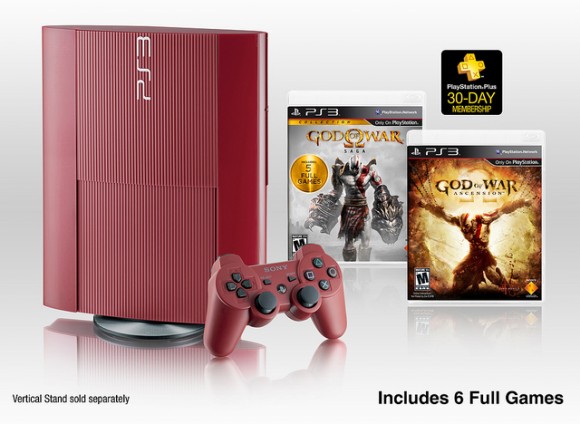 If you think that sounds like a lot of games, you’re right – you’ll be the owner of six God of War games if you choose to pick up this bundle, thanks to the inclusion of the God of War Saga. The God of War Saga takes the first two God of War games for PS2 and gives them a coat of HD paint, tossing the PSP titles Chains of Olympus and Ghost of Sparta in for good measure. It also features God of War III, which was the only game in the series made for the PS3 prior to the announcement of Ascension.

The Garnet Red PS3 in this pack will come equipped with a beefy 500GB hard drive and a matching controller. Aside from the entire God of War series and the PS3, purchasers will also get 30 days of PlayStation Plus, which is just enough time to tempt you into paying for a full year. Sony has given the bundle a price of $349, which doesn’t seem to bad considering the sheer amount of stuff you’re getting.