Along with Windows 8, Windows RT, and Windows Phone 8, Microsoft has released a handful of new keyboards, trying to cover the wide range of people who need a physical keyboard regardless of it they’re working on desktop or on a tablet. Of all of these keyboards, the new Sculpt Comfort Keyboard is probably the most interesting. The Sculpt is another ergonomic keyboard in a sea of products that claim to cut down on wrist strain and actually make typing easier. The question is whether that’s actually the case, or if it’s all PR fluff meant to get us to hand over cash for a keyboard we might not even need. Read on to hear the verdict. 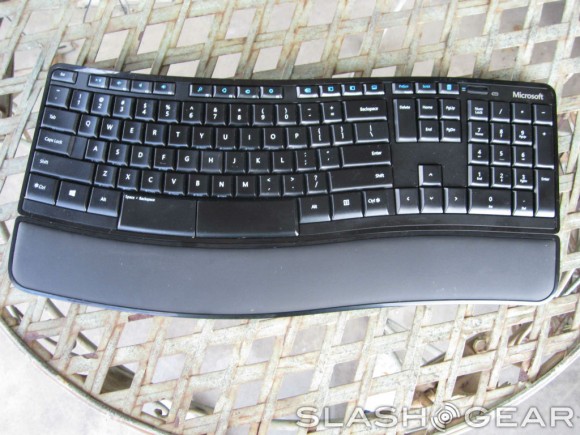 Unlike some other ergonomic keyboards, there isn’t a split down the middle of the Sculpt. The Sculpt looks more like a regular keyboard than some of the other ergonomic ones, save for a bump in the middle that raises some of the keys and gives it a nice curve. It looks really nice – I’ve never been a fan of the way most ergonomic keyboards look, but I have to say that this one is pretty easy on the eyes. It’s all black and white if we’re not counting the blue Windows 8 hot keys, and it’s relative slimness gives it a more compact feeling that some of the other beasts we’ve seen in the ergonomic field. 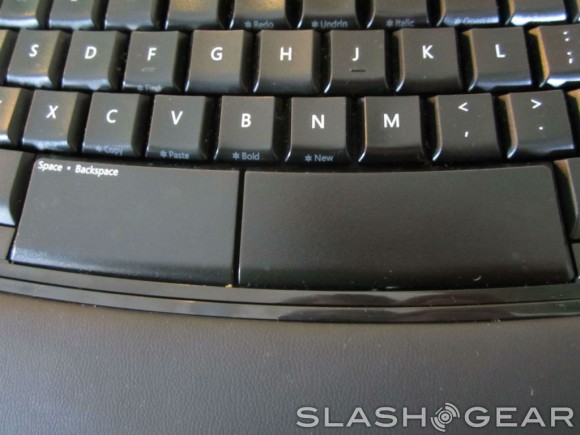 The keyboard may not be split, but in an interesting twist, the space bar is. Microsoft has turned the space bar into two different buttons – both of them do the same thing until you hold down one of the shift keys, then the left space button turns into a spare backspace key. Microsoft says it did this because the majority of users only ever hit the right side of the space bar with their thumb. By splitting space bar into two key and adding backspace functionality to the left one, users no longer have to reach for the actual backspace key while they’re typing up a storm. It’s an incredibly strange idea at first, but it works. Holding shift and hitting the space bar is much more comfortable than reaching for the backspace key, but it’s definitely going to take some getting used to. After all, we’ve only been reaching for that backspace button for years and years, so it makes it sense that it’s going to take some time to break that habit.

UPDATE: While shift-space does indeed activate a backspace, simply pressing the left half of the spacebar also initiates a backspace – simple and clean!

Other than the split space bar, there isn’t anything all that remarkable about the rest of the keys. Microsoft claims that the slight curve to the layout helps improve typing speeds, and I feel that it’s helped mine slightly. It was kind of hard to tell at first since I had to adjust to the curvy layout, but after that adjustment process was finished, I found that my speeds were a little bit better than when I was using my regular mechanical keyboard. Resistance on the keys is nice, and they make a pretty satisfying sound when you press them. You won’t get the “clack” you’re used to hearing if you regularly use a mechanical keyboard, but the keys still make a good sound when you hit them. 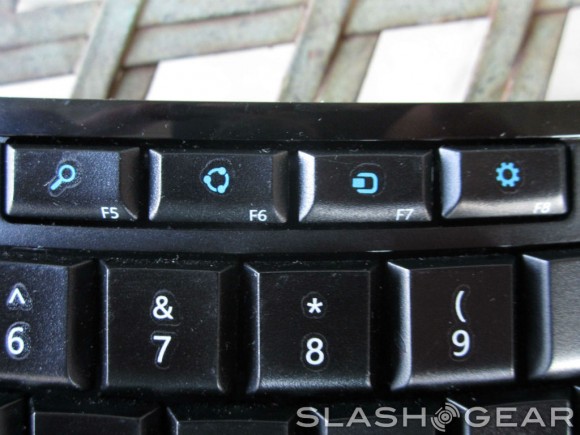 The only issue I have with the keys is the fact that the letters aren’t laser etched onto them. That, obviously, is a feature of more expensive keyboards, but it still would’ve been nice to have, since without it your keys will begin fading after a while. It isn’t the biggest of problems (far from it actually), but having your keys fade on you is always an annoying experience.

On the Sculpt, the function keys double as Windows 8 hotkeys, allowing you to navigate the new Windows 8 UI with ease. There are buttons for volume and audio playback, then you have the search, share, devices, and settings keys, which all take you to the different Windows 8 submenus that are featured in the right menu bar. There are also buttons that allow you to snap what you’re currently looking at to the left or right side of the screen, letting you look at two apps at once. Microsoft has placed a sliding switch to the right of the function buttons, which you can use to change the functionality on that row of keys. It’s definitely a nice touch, especially for someone who might still be getting used to the Windows 8 UI – instead of trying to find these menus and do these actions with your mouse, you can simply hit the shortcut key on the Sculpt. That should save those who are new to Windows 8 a lot of time. 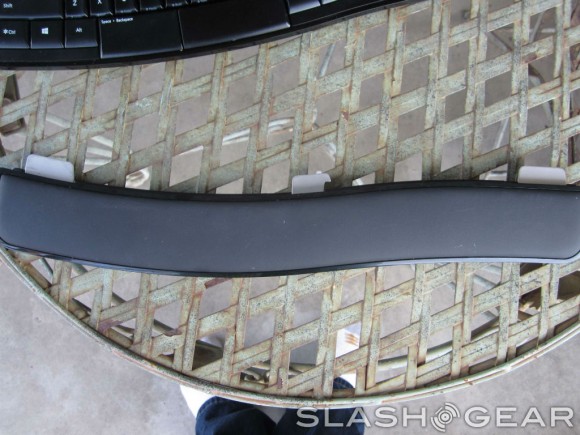 What I really like about the Sculpt is that it comes with a detachable wrist pad, but this one isn’t of the snap-on variety. Good thing too, because those snap-on wrist pads always feel so cheap and fragile. Instead, the wrist pad attaches to the Sculpt with a metal hook and a couple of metal plates. It slides into the bottom of the keyboard and locks into place, so you don’t have to worry about it flopping around while you type.

The wrist pad is soft enough to be comfortable, yet firm enough to where your wrists aren’t sinking into it. I think it gets the job done rather well, as it does a lot to take the pressure off your wrists while you’re typing. Of course, the Sculpt is still pretty easy to use if you remove the wrist pad (which cuts down on the keyboard’s overall size significantly), but if your job requires a lot of typing, you’ll probably want to keep the wrist pad attached as often as you can. 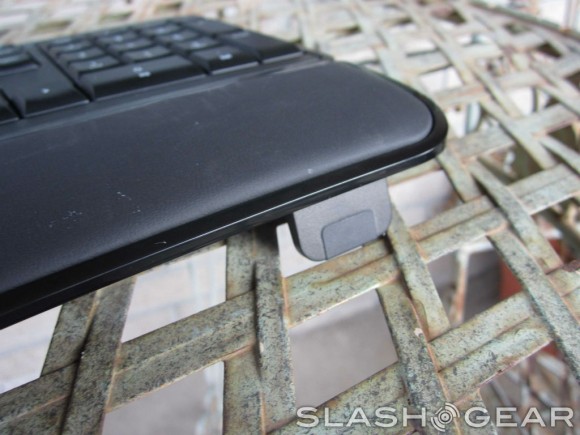 The stands have actually made their way to underneath the wrist pad, which is another strange feature that makes the Sculpt stand out from keyboards. It looks odd, having the stands on the front of the keyboard, but it actually feels surprisingly comfortable while you’re typing since it keeps your wrists a lot straighter than they would otherwise be. The only problem is that the Sculpt has a tendency to slide around when it’s up on its stands and placed on a hard, smooth surface. Most of the time I was using the Sculpt, I was typically using it without the stands, just because I found that keyboard kept sliding out from under my hands whenever I had them up.

The Sculpt is a wireless keyboard that’s powered by two AAA batteries and connects to your computer through a USB stick. Installation was a breeze, as it only requires that you connect the USB stick and give the system a few moments to install the drivers for the keyboard. Once you’ve done that, you’re good to go. As with most wireless keyboards, battery life is great. The batteries actually haven’t died on me yet, and I don’t think they will for another few weeks at least. In other words, if you pick up the Sculpt, you probably won’t have to worry about purchasing batteries all that often. The wireless capabilities work well too – I never had an instance where the signal cut out, and that’s really as good as it gets when you’re talking about wireless keyboards.

Even though I’ve never been a big fan of ergonomic keyboards, I have to say that the Sculpt Comfort Keyboard impressed. It isn’t the most feature-rich keyboard around, but Microsoft has done some interesting things with it. Splitting the space bar in two and turning one side into a spare backspace key was definitely a strange idea, but it seems to have worked. As I said above, it takes some getting used to, but once you remember to hold down the shift key and hit the left space bar, it serves as a good replacement for reaching across the keyboard to hit the actual backspace key. 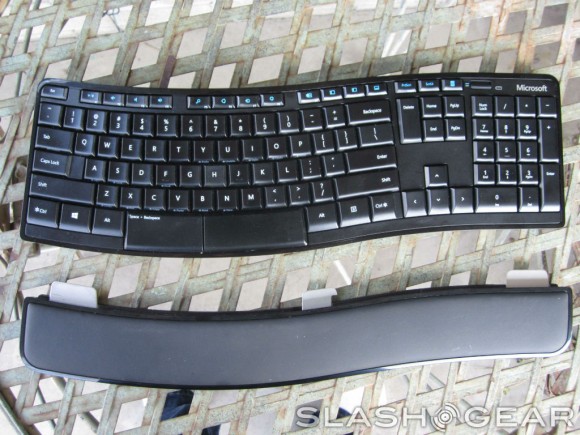 Again, the wireless functionality works well, and I think that will be a major selling point for some people. While I was testing the keyboard, the wireless worked flawlessly, so the Sculpt Comfort Keyboard earn high marks in that regard.

The price Microsoft has given this keyboard – $59.95 – seems reasonable too, though to be honest I’m used to spending $100+ on mechanical keyboards with all the bells and whistles for gaming, so I may not be the best judge of value in this case. Still, $59.95 isn’t all that expensive and this is a solid keyboard – the fact that it’s compatible with Windows 8, RT, 7, and Vista just adds value. If you’ve been looking for a new ergonomic keyboard, you might want to take a look at the Sculpt since it has features that make it stick out from the rest of the keyboards out there, and it’s even made specifically to play nice with Windows 8.