Today, NASA released a high-resolution self-portrait of the Mars Curiosity rover taken by the Mars Hand Lens Imager (MAHLI). The photo consists of 55 images that were stitched together to create one giant photograph of the rover. The images were taken on October 31, and were sent down to Earth this morning. 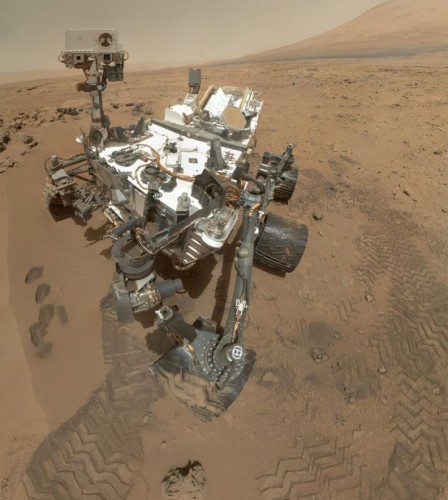 Obviously, this is nothing short of stunning. The image shows Curiosity in Gale Crater, and you can see the base of Aeolis Mons (or Mount Sharp) in the background, a 3-mile high mountain. To the left on the ground, you can see four small holes where Curiosity was digging around in order to find out if life on Mars ever existed.

However, the photo isn’t just for entertainment purposes. NASA uses the self-portrait to track the physical state of Curiosity, like dust accumulation and wheel wear. NASA will take several of these throughout Curiosity’s mission to track changes over time. However, due to the MAHLI’s location on Curiosity’s robotic arm, it’s only able to capture a certain portion of the rover.

Then again, Curiosity has 17 cameras on board, which is way more than what most professional photographers have on hand. NASA is making sure that Curiosity takes a lot of photos of different areas of Mars, and you can keep up with all the photos on NASA’s website. In the meantime, enjoy the self-portrait and think about the fact that this photo was taken on a different planet.