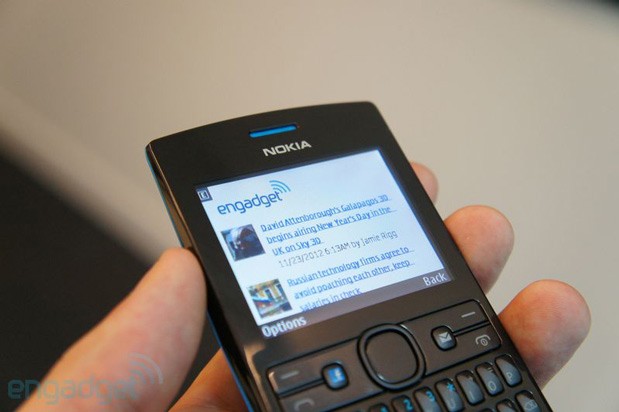 Feature phones don’t grace our pages too often, but when Nokia said it had a new Asha to show us, we thought we’d go take a look. We’ve been following the Asha range since it launched a little more than a year ago, but we were also interested to see Nokia Slam in action, a new Bluetooth quick-sharing feature with Android compatibility. There were no touchscreens in sight as we were introduced to the Asha 205 — a Series 40 QWERTY handset with a social angle aimed primarily at emerging markets, but also at those who either don’t have the cash or the need for a top-of-the-range device. Bearing that in mind, we gave the phone a brief once over, looking at what it does for roughly $62 (excluding taxes, etc.), rather than what it lacks compared with smartphones at higher price points. During the meeting we also glanced over the Nokia 206, which shares many of the same features but isn’t part of the Asha family due to its numpad input (see the video and gallery for more details). Head past the break for our thoughts on the Asha 205, and a demo of Nokia Slam in action.