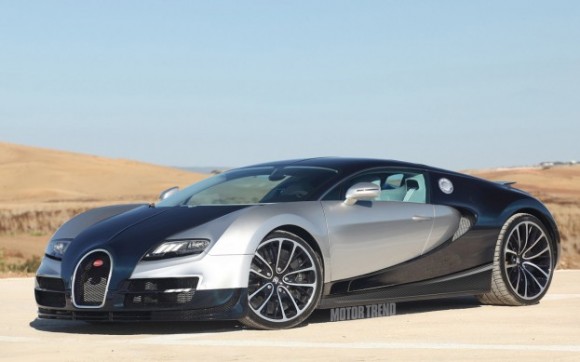 When it comes to superfast exotic sports cars, Bugatti makes one of the fastest cars in the world with its Veyron. The current Veyron SuperSport can reach a top speed of 259 mph. That is insanely fast by any definition of the word for street-legal vehicle.

That isn’t fast enough for Bugatti though with rumors pointing to an even more potent version of the Veyron in the works. Rumors are claiming that a new SuperVeyron is in the works that will use lightweight carbon fiber and more power to reach a speed of 288 mph. That is a 29 mph gain over the current SuperSport.

The car will also be insanely fast with a rumored 0 to 62 mph time of 1.8 seconds. 1.8 seconds! The carbon fiber used in the construction is said to shave 550 pounds off the weight of the current SuperSport Veyron. The engine used in the new car will be a massaged W16 producing 1600 hp.

Curb weight for the SuperVeyron is said to be 3527 pounds giving it a power to weight ratio of 2.2 pounds per horsepower. The car is expected to cost over $2.5 million. In case you’re wondering where you can actually take advantage of that insane top speed, there happens to be an event held a couple of times a year in Texas called The Texas Mile where you can go as fast as your car and your scrotal capacity allows.

Facebook
Twitter
Pinterest
WhatsApp
Previous articleStriiv launches $70 Play pedometer to track your athletics without fatiguing your iOS device
Next articleAsustek Q3 net profits said to be up 43 percent to $230 million thanks to Nexus 7, convertibles
- Advertisment -