When reading reviews of restaurants you’re interested in trying, it can be difficult to sift out the shill reviews and only spot the ones that are genuine. However, Yelp is looking to make it easier on its users by introducing Consumer Alerts. These alerts will warn you every time you come across a paid review on their site. 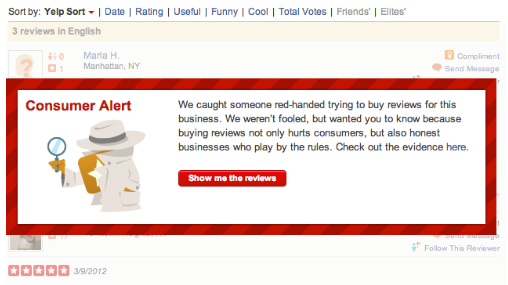 Starting today, when Yelp detects questionable activity, it will display an alert to Yelp users for 90 days, and it will also alert the business that the review was posted for. So far, nine alerts have already been issued on this first day, which seems like a low number, but Yelp says it’s still working on getting through more reviews and will always be scanning for odd activity.

The company mentioned in their blog post that they “want to make sure consumers are making informed decisions,” and “as efforts to game the system continuously evolve, so do [its] methods for combating it.” We’re glad Yelp is finally taking the initiative to further help out its users, and we hope other review sites step up to the plate as well.

However, Yelp’s plans don’t stop there. They also plan on implementing an IP address detection system where it will inform users when a business has received multiple reviews from the same IP address, which is easily a big red flag when it comes to online reviews. However, Yelp has had an automated filter system that’s used to detect fake reviews, but the company says that its Consumer Alerts are simply a secondary defense, and will help out even more with detecting paid reviews.

Yelp announces Consumer Alerts, lets you know when reviews are paid is written by SlashGear.
© 2005 – 2012, SlashGear. All right reserved.