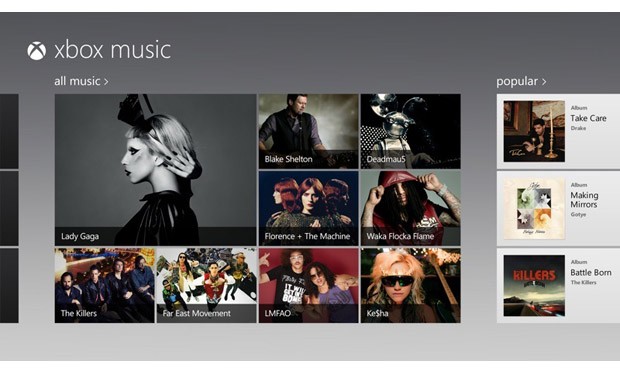 When Xbox Music goes live tomorrow on the Xbox 360, console owners will be the first to access the Spotify-esque service from Microsoft. Well, some of them will at least — existing Zune Pass subscribers (now an “Xbox Music Pass”) and folks willing to pony up $9.99/month or $99.90/year who also have an Xbox Live Gold account gain access to Xbox Music’s 30 million global song database via data stream (18 million songs for those of us in the US). Okay, okay, a free trial is available for 30 days. After that, though, 360 owners lose access unless they pay up.

Then, on October 26, Windows 8 PC and tablet users get the service for free — with or without the Xbox Music Pass — albeit with ads laced in. Windows Phone 8 is in the same boat with Xbox folks: no song-specific streaming without an Xbox Music Pass. That won’t arrive until some time “soon after” the PC/tablet version. Microsoft says the ad-supported free streaming is unlimited on PC and tablet, but that’s only for the first six months, after which it becomes time limited. A bummer for sure, but Microsoft’s banking on you digging the service enough to snag an Xbox Music Pass. But will you?

Like with Spotify and Pandora, some basic artist info, album/song info, and images garnish playing tracks, though not all artists are created equal — some artists had no images, while others had a detailed dossier. Microsoft says it’s adding more all the time, though. Xbox Music Pass holders can hang on to tracks for offline listening as well, which show up in your library and can be added to playlists. And should you wish to listen to a “Smart” radio station based on an artist/song/album, you can employ the “Smart DJ” (previously “Smart Playlist”) to create just such a station. The whole shebang is tied directly to your Microsoft login, mirroring settings and library data on all your devices (Xbox 360 included) accross the cloud. That same concept applies to playback, as you can pause a song on one device and pick it up right where you left off on another. Songs can also be purchased through the streaming service with or without the Xbox Music Pass, should you really want to hold onto that Barry Manilow track.