Thanks to Microsoft’s Xbox 360 Kinect motion-sensing device, hand gesturing is becoming more and more popular, and a lot of innovative companies are trying out the device themselves to come up with new ways to control things through hand gestures. Toyota has made a skateboard concept using a Kinect camera and a Windows 8 tablet to demonstrate some of the technology that the auto manufacturer may possibly implement into their vehicles in the future. 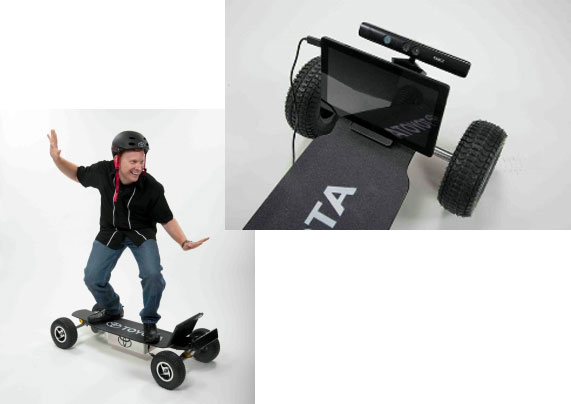 The skateboard’s speed is controlled by the hands of the operator. Moving your hand down close towards the Kinect camera speeds up the skateboard, while moving it further away slows it down. Toyota says this kind of hand gesturing could be used in vehicles to raise and the lower the volume of the radio, without ever taking your eyes off the road.

Toyota and Microsoft announced a partnership last year that would allow Toyota to test out the Kinect’s technology for possible use inside of vehicles. Toyota has said that hand gestures would go well with voice recognition that’s already implemented in some vehicles, and may even replace voice recognition, since the technology is sometimes hindered by accents and dialects.

Toyota is also experimenting with skeletal tracking technology from Microsoft, which can track the movements of passengers in a vehicle. Some functions on a navigation system in newer cars are locked out if they’re going faster than 6mph (for safety reasons). Microsoft’s tracking technology would be able to differentiate between the driver and passenger, allowing the passenger to operate the navigation system even if the vehicle is moving.

Obviously, these are all just concepts for now, and the Toyota team is simply using this as inspiration for future ideas. However, it may not be long until we see Kinect-like motion sensors inside of vehicles to not only track movements of passengers, but also to offer hand gestures to make driving even safer.