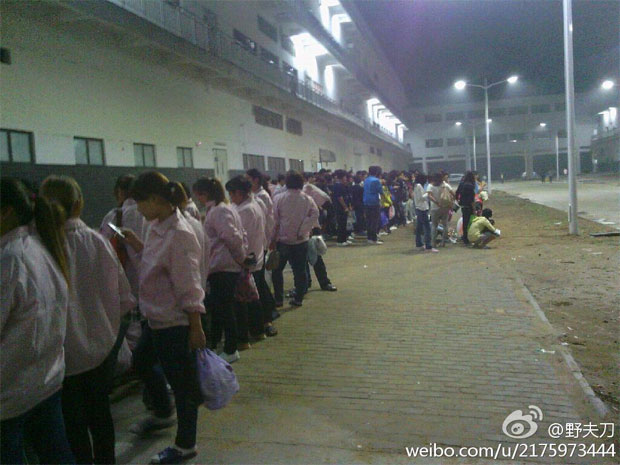 Unbox that shiny new iPhone 5 only to find it marred with scratches and blemishes? Good news: Apple is asking Foxconn to adhere to stricter quality demands for its flagship handset. Not so great news: workers at the firm’s Zhengzhou factory are striking over the demands. According to China Labor Watch, three to four thousand workers stepped off the production line to protest the new standards, which only allow for a 0.02mm appearance defect. “It’s tough under such stringent quality requirements,” writes Sina Weibo user and Foxconn employee Yefudao. “A 0.02mm appearance defect is already beyond that of our vision. With such a demanding task, workers’ mental pressure becomes so immense that they have to vent it out.”

China Labor Watch reports that the issue stems not only from the higher quality demands, but the fact that workers are being asked to meet them without receiving the training necessary to do so. The situation hasn’t broken out into a riot, but a dispute between line workers and quality control inspectors reportedly sparked a fight that led to property damage, injury and some hospitalization. Production lines have temporarily been frozen by management while Foxconn deals with the situation.

Workers at Foxconn’s Zhengzhou factory strike in reaction to new iPhone 5 quality standards originally appeared on Engadget on Sat, 06 Oct 2012 01:17:00 EDT. Please see our terms for use of feeds.