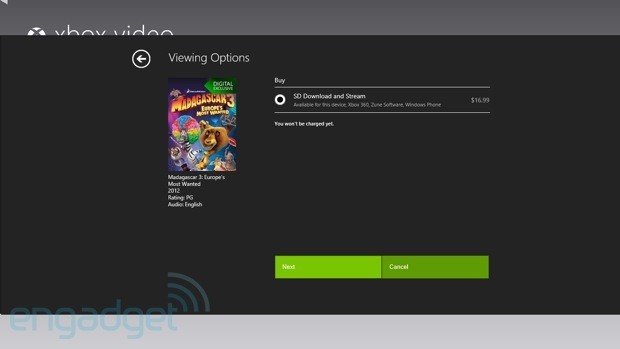 Microsoft’s real money to “Points” conversion has always been a point of contention among consumers, but that may all be about to change — if the Windows 8 Zune Marketplace is any indicator, that is. Movies and music purchased via Windows 8 no longer default to the bizarre indirect system Microsoft set in place years ago with its Xbox Live platform, instead allowing actual currency for payment as well as MS Points (Windows 8 exclusively used the MS Point system for media purchases throughout beta). In fact, the system even automatically selects hard currency as the standard, reports The Verge.

The MS Point system converts 80 MS Points to $1, and points much be purchased in a minimum of 400 point blocks — a practice criticized as both deceptive and consumer hostile. Points were first implemented on Microsoft’s Xbox 360 for purchase of games and associated content on Xbox Live Marketplace; the practice has since expanded to Microsoft’s Zune music and movie platform, as well as Xbox.com. Direct payment is available as well, but only for select content, such as Games on Demand.

As of this morning, the change hadn’t affected the Xbox 360 Marketplace, though rumors earlier this year indicated that MS Points may be wholesale phased out by the end of 2012. Microsoft had yet to respond to a request for comment as of publishing.

Windows 8 defaults direct cash payments for music and movies, puts Microsoft Points on backburner originally appeared on Engadget on Mon, 08 Oct 2012 14:37:00 EDT. Please see our terms for use of feeds.

The Verge  | Email this | Comments