Mars explorer Curiosity is about to grab itself a scoopful of soil, the first time the sample gathering system has been used while the robotic rover has been on the red planet, but just what is the NASA ‘bot hoping to find? According to NASA, the mission – which will see Curiosity flex its incredibly slow claw – is both a test of the rover’s hardware and of the Martian surface itself, an important double-hit to help show whether Curiosity is made out for exploration, and whether Mars was once hospitable to life. 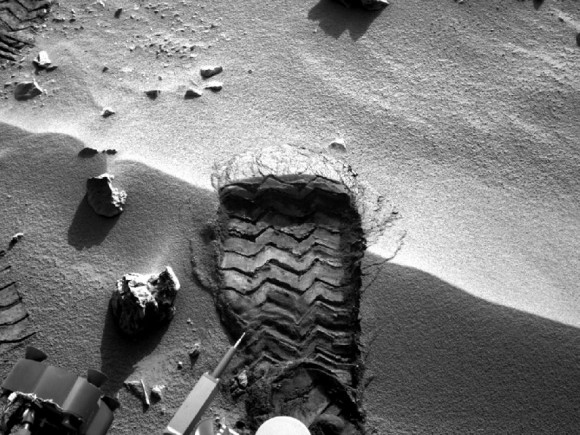 “We now have reached an important phase that will get the first solid samples into the analytical instruments in about two weeks,” Mission Manager Michael Watkins of NASA’s Jet Propulsion Laboratory in California said of the new trials. In the meantime, Curiosity will do some cleaning of its sample collecting kit: the first two scoopfuls of dirt, exposed by scuffing the surface of the planet with one of its wheels, will be shaken up and then discarded, so as to remove any particulates that have been brought with the rover from Earth.

“It is standard to run a split of your sample through first and dump it out, to clean out any residue from a previous sample. We want to be sure the first sample we analyze is unambiguously Martian, so we take these steps to remove any residual material from Earth that might be on the walls of our sample handling system” Joel Hurowitz, JPL team

The scoop itself has a small capacity – it can dig down to 1.4-inches, and is just 1.8-inches wide and 2.8-inches long – and moves particularly slowly; in the video below, filmed during tests pre-launch back on Earth, the footage is in fact being played at four-times normal speed.

The third sample collected will be put under the microscope, of sorts, with Curiosity’s mast cameras, though a small amount will be loaded into the Chemistry and Mineralogy X-ray powder diffraction and fluorescence instrument (CheMin). This instrument, designed and developed by NASA scientists, uses X-rays to identify different crystalline structures, using the fact that they refract such rays at predictable angles to figure out the composition.

A fourth scoopful will repeat that CheMin testing, but also be provided to the Sample analysis at Mars (SAM) system. This instrument – a combination of multiple tests and the collaborative work of NASA scientists and counterparts from around the world – includes a Quadrupole Mass Spectrometer, a gas chromatograph and a tunable laser spectrometer, and will primarily be used to identify oxygen and carbon isotope ratios in carbon dioxide (CO2) and methane (CH4).

Such testing will help Curiosity to figure out whether those atmospheric gases were created geochemically or biologically, and an important step in understanding what the atmosphere of the planet was like in the past.

Curiosity’s appetite for filth won’t be sated by a couple of scoopfuls in the next few weeks, however. Assuming all goes to plan, the rover will travel roughly 100 yards to the east, and then pick out a rock which will be the first subject for its drill. That can carve a hole 1.6cm wide and up to 5cm deep, and then collect more samples for further testing.

Why does NASA’s Curiosity want Mars dirt anyway? is written by SlashGear.
© 2005 – 2012, SlashGear. All right reserved.