It’s easy to admit that sitting in traffic jams isn’t our favorite thing to do. Then again, it’s probably no one’s favorite thing to do. That’s why Volvo has been developing a technology that will self-drive some of Volvo’s upcoming cars in slow-moving traffic jams. By pushing a button, the car will automatically follow the car in front, as long as speeds are 30mph and under. 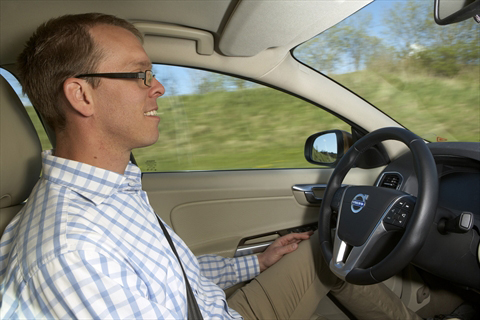 Of course, it’s not only annoying to be in traffic jams, but they can also decrease your car’s fuel economy with the constant start-and-stop motion, and it can wear out your clutch quicker because you’re always changing gears. Volvo’s new traffic jam assistance system makes sure your car doesn’t wear down quicker than it needs to.

The technology uses a combination of camera and radar sensors in order to keep a safe distance between the car in front, and it’s actually based on the company’s current Adaptive Cruise Control and Lane Keeping Aid technology that was introduced in the Volvo V40 earlier in 2012. This new traffic jam technology is an evolution of those two features and is expected to go into production in 2014.

Volvo says it can easily handle both straight and curved stretches of road, and is smart enough to steer around unexpected obstacles. Plus, it can be cancelled or over-ridden by the driver at any time. However, one issue we’re curious about that Volvo didn’t mention is how well the car adapts to surrounding vehicles who cut you off suddenly. So while you may experience effortless traffic jam driving, you’ll probably still have to be prepared in case someone tries to butt into your lane at the last second.