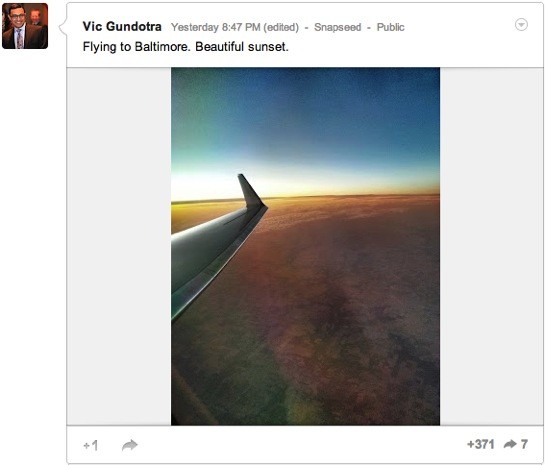 When Google bought Nik Software, there was some worry that Snapseed would go the proverbial dodo’s route and fade into obscurity as part of a larger Google app. We won’t see that ignominious end anytime soon if Senior Engineering VP Vic Gundotra’s photography is as valid a clue as it looks. On an evening flight to Baltimore, Gundotra posted a view of the setting sun to Google+ using Snapseed — a rather unique achievement given that the existing, iOS-only app doesn’t know the social network exists. Knowing the executive’s usual choice of smartphone, the public use could be the hint of the already planned Android port getting close to launch, even if there’s no way to know exactly when and how the image editing app could arrive. Let’s hope that Gundotra’s post is more than just a fleeting glimpse of a product that gets shelved later on.

Vic Gundotra post hints Snapseed for Android may be close, bring Google+ integration originally appeared on Engadget on Thu, 04 Oct 2012 23:41:00 EDT. Please see our terms for use of feeds.