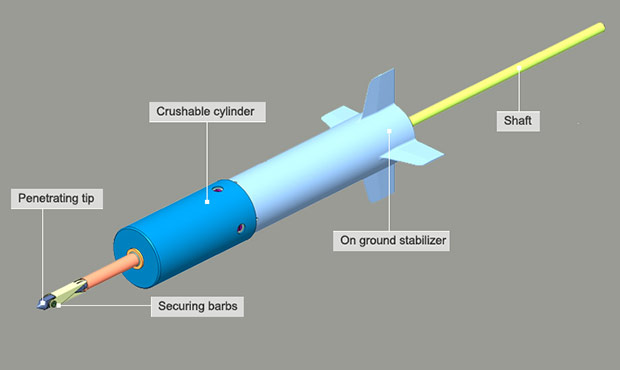 Sure, we can pull space junk out of orbit with lasers or use it to cobble together new satellites, but if engineers at space firm Astrium UK have their way, space trash could be disposed of with the help of harpoons. Currently in a conceptual stage, the system is designed to shoot defunct satellites or other debris with a harpoon mounted on a “chaser satellite” and use a tethered propulsion pack to send the rubbish in an atmospheric descent where it’ll burn up. Since the projectile could shoot straight through targets and result in even more garbage, it’s been fashioned with a crushable portion to reduce its speed upon impact. There’s no concrete word on when the outfit’s solution might be put in action, but they’ll present their work on Wednesday at the 63rd International Astronautical Congress in Naples (Italy, not Florida, mind you). If you can’t wait to see the harpoon at work, head past the break to catch tests of an Earth-based prototype.

UK engineers developing harpoon that could help space junk meet a fiery end originally appeared on Engadget on Mon, 08 Oct 2012 05:21:00 EDT. Please see our terms for use of feeds.