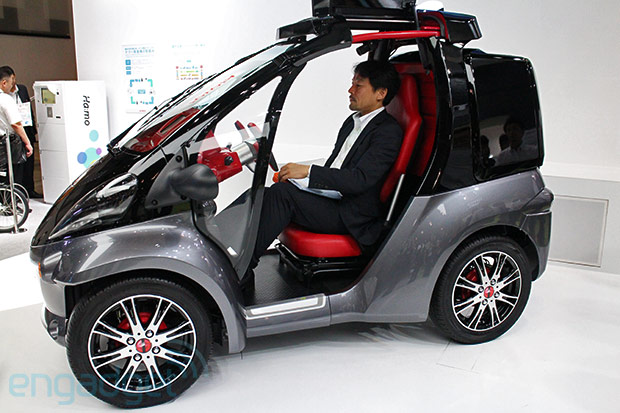 Toyota is showing off its new Smart Insect prototype at the company’s CEATEC booth. The fully electric car charges via a standard 100-volt AC outlet, and it’s decked out with gull-wing doors and motion detection courtesy of Microsoft’s Kinect. The on-board motion sensors allow the car to recognize its owner based on face and body shape, and it predicts the owner’s behavior by analyzing movement and determining when to open the door, for example. (It also allows for the front and rear displays to show a welcome message when the owner approaches the car.) There’s also voice recognition for opening the car door and other functions, with a speaker on the hood of the car and dashboard-mounted “dialogue monitors” on the front and back.

The tech carries through to the Insect’s interior, which sports a wireless charging pad, a dash-mounted monitor that connects to the driver’s handset and a button for dialing up Toyota’s virtual agent. As a connected car, the Insect naturally ties in with entertainment and navigation services (in this case, via Toyota’s Smart Center). There’s also integration with a home energy management system, which allows the owner to adjust air conditioning and lock the front door via a smartphone app. As this is a proof of concept — and one we couldn’t test out, at that — it’s unclear how well these features work, and it’s unlikely that we’ll ever see the prototype make it to market. Still, it’s fun to dream, and you can do that by tuning into our hands-on video just past the break.

Is 5G dangerous for airplanes? Here’s what pilots and the FAA say