The Titan supercomputer at the Oak Ridge National Laboratory has been upgraded, tackling complex climate change calculations with 20 petaflops worth of new processors. Under the (considerable) hood its NVIDIA’s “Kepler” GPUs and AMD Opetron 6274 processors doing the heavy lifting, though NVIDIA can’t resist pointing out that its graphics chips are in fact carrying 90-percent of the overall load. The GPUs, more commonly found powering gaming rigs, help make Titan “the world’s fastest supercomputer for open scientific research.” 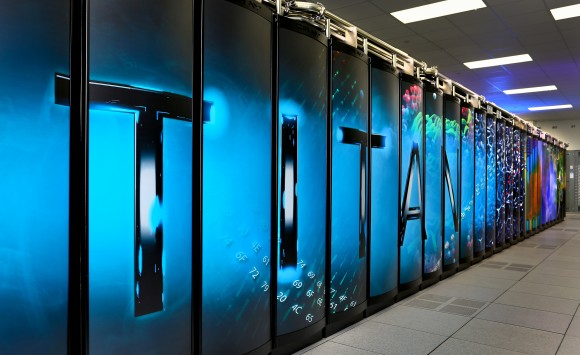 That research will include simulating physical systems, such as weather patterns, or progressions in energy, climate change, efficient engines, materials, and other fields. However, unlike most supercomputers, where access is jealously guarded, Titan takes a more open approach to access.

Researchers from schools and universities, government labs, and private industry can access Titan – by arrangement, of course – to crunch their own data. Final testing is still underway by the laboratory and Cray, and the supercomputer’s first year will be dominated by work on the Department of Energy’s Innovative and Novel Computational Impact on Theory and Experiment (INCITE) program.

“The improvements in simulation fidelity will accelerate progress in a wide range of research areas such as alternative energy and energy efficiency, the identification and development of novel and useful materials and the opportunity for more advanced climate projections” James Hack, director of ORNL’s National Center for Computational Sciences, said of the new machine.

In total, there are 299,008 CPU cores, sixteen to each of 18,688 nodes; each node also has an NVIDIA Tesla K20 graphics accelerator. The cores are used to guide the simulations, while the GPUs are relied upon to do the actual data crunching; altogether, it’s more than 10x faster and 5x more power efficient than the Jaguar supercomputer Titan replaces.

In fact, Titan can simulate 1-5 years per day of computing time, whereas Jaguar took a day to work through around three months worth of data. ORNL says it’s the equivalent of “the world’s 7 billion people being able to carry out 3 million calculations per second.”