It’s rare enough to see a meteorite and its resulting fireball streaking through the atmosphere. What’s even more rare is for the meteorite to cause a giant fireball in the sky witnessed by multiple people and then to have enough of that meteorite survive the fiery entrance to the Earth’s atmosphere to strike the ground. Even rarer still is for that fragment meteorite to hit a home and be recovered. 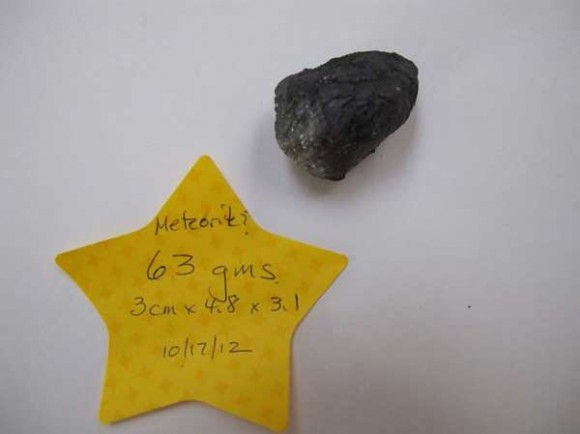 Last week, a meteor was spied in the skies over the San Francisco Bay area. A San Francisco Bay resident named Lisa Webber found the small two-inch chunk of meteorite you see in the photo above in her yard. The meteorite fragment struck the roof of her home three days before she found it. Webber said that she heard the meteorite fragment hit the roof of her home, but didn’t think anything about the sound until she heard news reports of a meteorite exploding over the Bay Area.

Since discovering the chunk of meteorite, scientist Peter Jenniskens from the Seti Institute in Mountain View California has confirmed that the piece of rock is indeed debris from the meteor that streaked through the skies in the San Francisco Bay area last Wednesday. Jenniskens says that finding the piece of meteorite is significant because it will allow scientists to create a trajectory and trace the path to the meteorite’s origins in the asteroid belt.

Webber had used a magnet to determine if the chunk of rock she found in her yard might be a meteorite. It appears that the small chunk of rock impacted the roof of her home hard enough to leave a charred mark on the roof. Tiny pieces of meteorite can be valuable to collectors, but it’s unclear what Webber plans to do with the meteorite she discovered.