The last time we talked about the ThinkGeek 8-bitty wireless game controller for the iPhone, iPad, and Android devices was way back in February of 2012. At the time, the little old school Nintendo-style game controller was tipped to launch later this year at price of $25. If you liked what you saw in the controller, it is available and shipping right now from ThinkGeek. 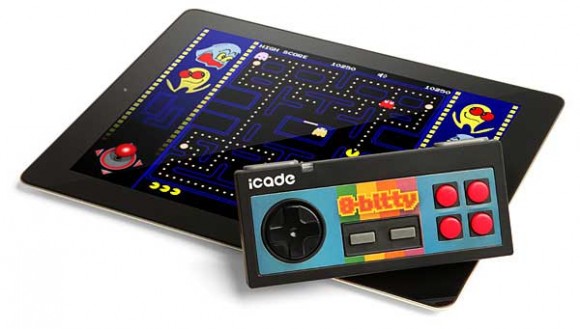 The one caveat is that it’s now a bit more expensive than we originally talked about selling for $29.99. It looks very much like the Nintendo controller on my original system way back in the day. The controller is designed to fit in your pocket and supports the iPhone, iPad, and Android devices. It has eight buttons with four face buttons on the right side of the control, two shoulder buttons, and a D pad for movement.

The controller uses Bluetooth connectivity and automatically turns itself off to save power. The little 8-bitty controller is a portable version of the iCade cabinet and is fully compatible with all iCade games. The controller was developed using an open platform allowing app developers to support the controller with no permission from Apple or ThinkGeek.

ThinkGeek notes that the controller is specifically compatible with all the Atari Greatest Hits games available for the iPad via an app. The controller gets power from a pair of AAA batteries, which aren’t included. Honestly, I think this is a more attractive controller for retro gaming than the big and bulky iCade cabinet.