Back in May 2010, German authorities poked around the issue of what information Google collected via its Street View cars, eventually leading to the search engine giant’s admission that it pulled personal information from unsecured WiFi networks. Thus began what has been an ongoing series of privacy concerns in Germany regarding online map services like Google Maps. To help allay these concerns, several companies have banded together to form a map-blurring service. 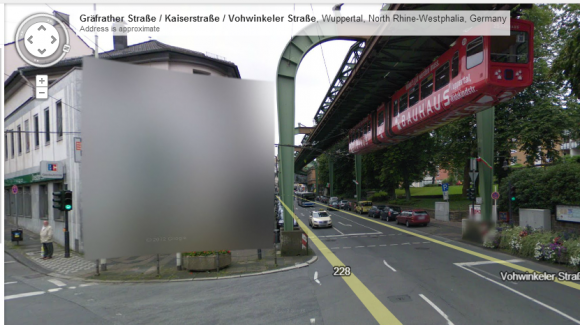 In 2011, Google ceased operation of Street View cars in Germany despite a ruling by the Berlin State Supreme Court that it was legal for the company to take the photographs. German residents could take advantage of an opt-out program to have their houses blurred on Maps, something that almost one-quarter of a million households opted for. Now, to help mitigate the myriad of privacy concerns, Google and several other companies have joined together to launch the service geodatendienstekodex.de.

The joint-effort organization is called Verein Selbstregulierung Informationswirtschaft, which, according to ZDNet, means something akin to “The Association for Self-Regulation in IT.” The organization’s members include Google, Nokia, Microsoft, Panolife, Deutsche Telekom, Deutsche Post, and Encourage Directories. How does the service work?

German residents with privacy concerns can visit Geodatendienstekodex.de and file a complaint regarding an image of, for example, an exposed license plate or other issue. The complaint will then be reviewed by the relevant company and the image blurred if necessary. This act of self-regulation will benefit everyone, ultimately, eliminating the need to pass a law while protecting the privacy of those who happen to get caught in the camera’s range.

Tech companies launch map-blurring service in Germany due to privacy concerns is written by SlashGear.
© 2005 – 2012, SlashGear. All right reserved.

Facebook
Twitter
Pinterest
WhatsApp
Previous articleHuawei Ascend Y heads to US Cellular, is available now for $30 on contract
Next articleMessage from Me offers dispatches from early education, we go eyes-on (video)
- Advertisment -