We all know you have a secret Starbucks addiction that you just can’t seem to kick, but that’s okay — we’re right there with you. If you happen to have a new iPhone 5 or if you upgraded to iOS 6, you’ll be pleased to know that the Starbucks iOS app has added support for Passbooks, meaning you can pay for that Venti White Chocolate Mocha right through your phone. 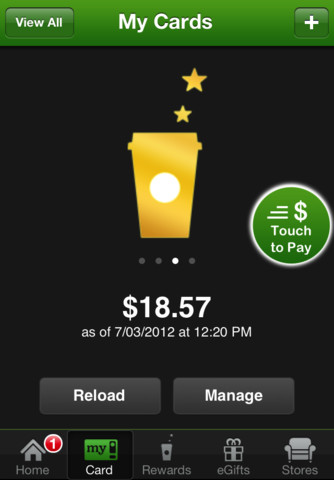 You’ll have to get a Starbucks Card first if you don’t already have one, but once you get one, you can add your account to Passbook directly through the Starbucks app, which will then allow you to pay for food and beverages, check your card balances, reload your card with more cash, and add rewards to get free drinks. All of this can happen right on your iPhone.

For what it’s worth, though, Starbucks actually allowed customers to pay through their app long before Passbook came along, and it featured some of the same functions that its news Passbook integration features. However, the added Passbook functionality might just be a way for Starbucks to officially get in on a growing and popular payment system.

The Starbucks iOS app sadly doesn’t yet support the iPhone 5′s larger 4-inch screen, which means users are met with with black bars on top and bottom as the app is still in 4:3 format. However, now that Passbook support is in the Starbucks app, we’ll most likely see official iPhone 5 support follow shortly.

The Starbucks iOS app is a free download and the update is available now in the iTunes App Store.