HomeNewsSpider-Man Blu-ray comes with a Second Screen app for iPad and Sony's...
News 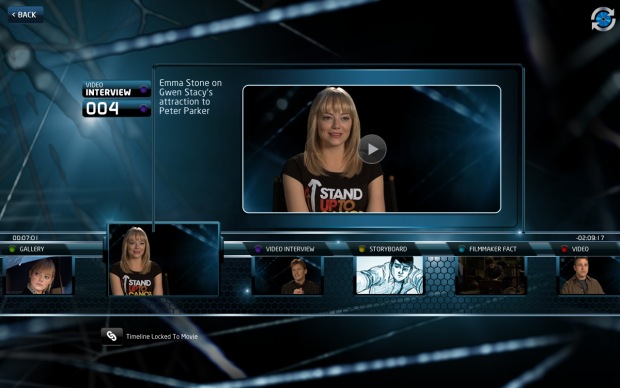 Since no blockbuster movie in 2012 can have a home release without a second screen companion app for fans to dig through extra content while they watch, Sony has, naturally, announced one for The Amazing Spider-Man. Just like the only three movies to best its take at the box office this year (The Avengers, The Dark Knight Rises and even The Hunger Games), Spider-Man’s app syncs with the movie in a Timeline Mode that pulls up featurettes, storyboards and the like, while Production Mode lets users sift through the moviemaking process, then select particular clips to play on their TV. Unlike some of the others it is not only on iPad but also Android, however the press release indicates it’s restricted to Sony’s own Tablet S and Xperia Tablet S. Still, we were able to initiate the 500MB+ download and access it on non-Sony tablets including the Nexus 7 and an CyanogenMod HP TouchPad, so your mileage may vary. You can check out the apps for free at the links below, a preview trailer embedded after the break and snag the movie itself for $25 on Amazon, delivered November 9th.

Spider-Man Blu-ray comes with a Second Screen app for iPad and Sony’s Android tablets originally appeared on Engadget on Wed, 03 Oct 2012 22:36:00 EDT. Please see our terms for use of feeds.