Today is a pretty big day for the folks at SpaceX and NASA, as the Dragon capsule has detached from the International Space Station and will soon begin plummet toward the surface of Earth. Engineers on the ground remotely controlled the station’s robotic arm as it removed the Dragon capsule from the ISS earlier today, pointing it in the right director for its return trip. To get back to Earth, Dragon will use a set a pre-programmed commands to perform a series a burns, with the final one happening in just about an hour (2:28 PM Eastern) to slow the capsule down and prepare it for re-entry. 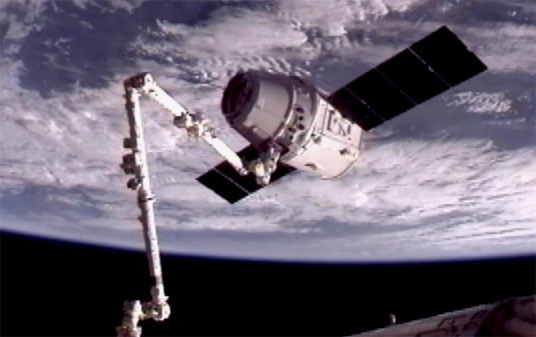 Then, at about 3:20 PM Eastern this afternoon, Dragon will splash down in the Pacific ocean, 250 miles off the coast of Baja California. The capsule carried 882 pounds of supplies with it to the space station, but it will be returning with even more. When Dragon reaches Earth, it will be packed with 1,673 pounds of stuff, which includes “163 pounds of crew supplies, 866 pounds of scientific research, and 518 pounds of vehicle hardware and other hardware.”

Those 866 pounds of scientific research include things like urine and blood samples taken aboard the International Space Station, and they’ll need be returned to NASA within 48 hours of Dragon’s splashdown for testing. The hardware that’s being returned to NASA include defective parts from the Space Station, which will need to be examined by scientists here on the ground. Make no mistake, Dragon has a lot of important stuff on board, so here’s hoping that everything goes as planned this afternoon.

The SpaceX Dragon capsule has been attached to the International Space Station since October 10. There were a couple hiccups with the launch, but Dragon made it to ISS intact – though those hiccups did have some unintended consequences for a satellite carried into space on the back of the Falcon 9 rocket. Be sure to check out our story timeline below for more on the SpaceX Dragon!