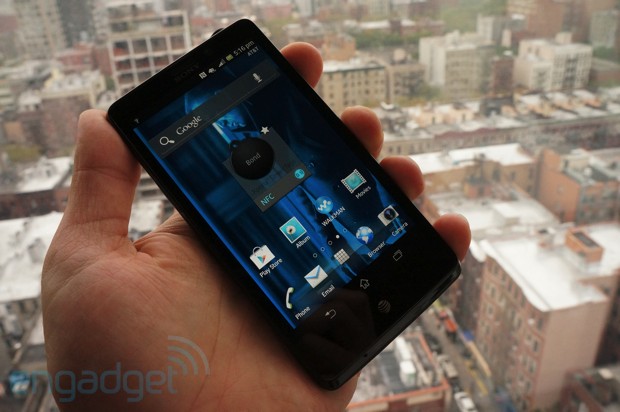 It’s not unusual for a device to be sold under a couple of different names for the purposes of carrier branding, or to distinguish a global GSM model from its US bound LTE sibling. Sony seems to be trying for a record though, with the Xperia T adding a fourth rebranding. The company’s latest flagship is landing on AT&T here in the US as the Xperia TL. At an event today in NYC the carrier broke out the curved 4.6-inch LTE Android device and we took the opportunity to give it yet another chance to impress us, after falling short of “wow” it’s first few times around the block.

Back at IFA 2012, when we first got up close and personal with Sony’s latest flagship, we were left feeling rather unimpressed and things haven’t changed. The fit and finish of the TL just doesn’t live up to the big boy breeches of its high-end ilk. Yes, it feels good in the hand, owed in part to that matte plastic back and subtle arc S-like curve, but the materials feel cheap. Thankfully, that sentiment doesn’t spill over into its performance, as the 1.5GHz dual-core S4 powering the device does an admirable job keeping navigation brisk.

With a 720p HD Reality display powered by the outfit’s Mobile BRAVIA Engine, you’d expect superb readability from the handset, especially in the dim light of this event. Though colors on the panel are bright and viewing angles seem to hold up fairly well, we did take issue with its overall brightness. Even pumped up to max, the screen just seemed a bit too dark for our tastes.

As with all things carrier-branded, this one lands with a host of AT&T apps onboard alongside three of Sony’s own like Media, Album and Walkman. The build of Android on the device is still Ice Cream Sandwich with a light skin, but we were assured an upgrade to Jelly Bean is forthcoming and, given the company’s track record, we’re inclined to believe it. This official Bond Android phone’s targeted for a holiday season release, so sit tight if you want to go all in on this Xperia. Click on past the break for a brief video tour.

Terrence O’Brien contributed to this report.