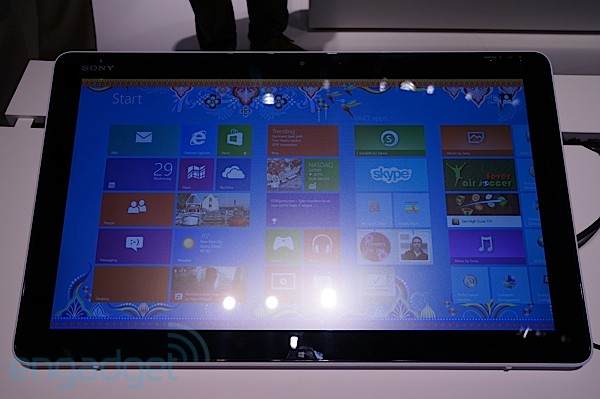 Sure, you were expecting PC makers to announce loads of Windows 8 hybrids, but a battery-powered all-in-one? Probably not. Nonetheless, that’s exactly what Sony unveiled last month at IFA when it showed off the VAIO Tap 20. Designed with families in mind, it could stay plugged into an outlet, but it’s built so that you can carry it easily enough from the kitchen to the living room, if that’s where the kids are hanging out. (It’s 11.4 pounds, so we’re guessing you won’t want to schlep it much farther.) Though we’ve already gotten a sneak peek at the machine, Sony announced today that it will go on sale in the US on October 26th (the day Windows 8 launches), starting at $880.

At that entry-level price, you’ll get a laptop-grade Core i3 processor, 4GB of RAM and a 500GB hard drive, though you can also configure it with i5 and i7 CPUs and an SSD. As the photos suggest, that 20-inch, 1,600 x 900 display can lie flat, which should come in handy with drawing apps and certain games, like jigsaw puzzles. In keeping with that kitchen-friendly, kid-proof theme, Sony’s also billing the display as “drop-resistant” — there’s a rubber seal around the bezel that promises to keep water far, far away from the motherboard. Oh, and though this isn’t exactly a premium desktop, the display at least uses IPS technology, so it’s safe to say you can expect decent viewing angles if you’re crowding around to watch a movie or have the screen lying flat. Rounding out the spec list, the Tap 20 also has built-in NFC, a 1.3-megapixel webcam, dual speakers and a subwoofer.

Software-wise, the Tap 20 comes with Artrage Studio Pro, along with Fingertaps, a Sony-made app that combines drawing functions with to-do lists and reminders, all arranged in a cute clothes-pin-style interface. Head over to the Windows Store and you’ll also find some other Sony apps ready for download, including the Socialife aggregator, Music by Sony, VAIO Movie Creator and Album by Sony (the latter is a photo and video organizer). Again, this thing won’t go on sale for another two weeks, but if you’re curious we’ll point you toward our earlier hands-on post for photos and video.