Sony has introduced its first tabletop PC in the US market, the VAIO Tap 20, a massive 20-inch tablet computer, as well as the smaller VAIO Duo 11 “hybrid slider” PC, which we reviewed back in August. In addition to the Tap 20 and the Duo 11, Sony has also released touch-enabled ultrabooks, including a refresh of the T13 and the E series 14P models. This line of touch-enabled PCs runs Windows 8. 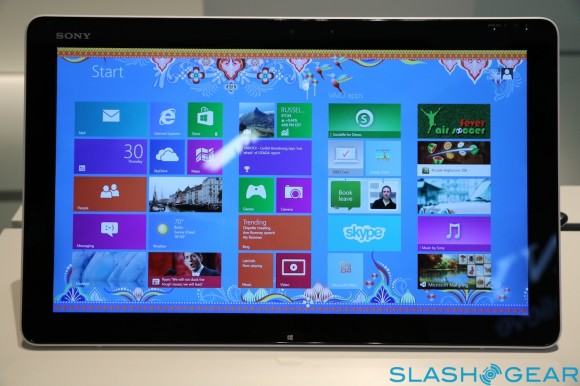 We got our hands on the Tap 20 back in August, and yes, it is as massive as you think it is. This 20-inch tablet is a full PC, and offers a 10-multitouch touchscreen at 1600×900 resolution, a front webcam, USB ports, audio in and out ports, an adjustable metal stand, and a battery. Watch us playing Fruit Ninja on Tap 20 in the video below. The VAIO Tap 20 is priced at $879.99, and will be available in white and black.

Meanwhile, the smaller “hybrid slider” VAIO Duo 11 PC is a smaller, portable tablet/laptop hybrid, with a built-in keyboard that slides under the display when you want to use it as a tablet, and slides out when you want to use it as a touch-enabled laptop. The Duo 11 has a full HD display, a pressure-sensitive stylus with swappable pen tips, a backlit keyboard, Active Clip, Sony original app for photo cropping, and the Note Anytime note taking application. It weighs in at 2.84lbs. The VAIO Duo 11 is priced at $1099.99, and will only be available in black. 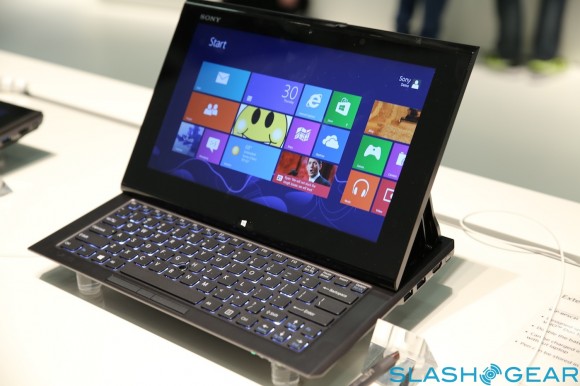 As a bonus – especially for artists and graphic designers – Sony partnered with ArtRage, and will provide a copy of ArtRage Studio on all five of these new touch-enabled devices. In addition to ArtRage, the VAIO Tap 20 will include the FingerTapps Organizer, a calendar/organizer app designed to allow families to easily share notes and events with each other, perhaps an indication of who Sony’s primary intended market is. In line with the family-oriented apps, the VAIO Tap 20 will also include My Daily Clip, an app developed in partnership with Sony Pictures Home Entertainment that allows individuals to sit around the tablet and play a movie trivia game.

All five of these devices will be available at the end of the month. Whether the Tap 20 and Duo 11 are the future of PCs as traditional PC sales slip and Microsoft pushes its touch-friendly Windows 8 is yet to be seen. For now, however, it looks like things are getting interesting.